Putin cancels US trip to deal with protests, criticism 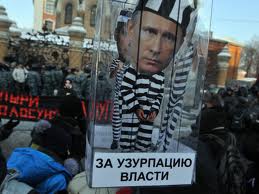 Vladimir Putin will miss a planned visit to the US this month for a key global summit and a much-anticipated meeting with President Barack Obama, the Kremlin has confirmed, as the Russian president faced pressure from protests and opposition criticism at home.

The White House announced on Wednesday that Putin was unable to join the other leaders of the Group of Eight industrial nations meeting outside Washington on 18-19 May. The Kremlin said Putin needed to finish work setting up his government.

Instead, Russia will send Dmitry Medvedev, the former president and new prime minister, to the G8 summit.

The Kremlin said Obama expressed “understanding” at Putin’s cancellation. The two presidents are due to meet at another global summit in Mexico in mid-June.

Putin returned to power this week after four years to a post he had previously held for two terms. Criticism of the US was a central theme in his election campaign, but it is not clear whether he will pull back from Medvedev’s efforts at co-operation with the US in some areas.

Putin’s inauguration on Monday was preceded by violent protests at an opposition rally in Moscow the day before. Police dispersed the rally and detained hundreds of people.

Hundreds of protesters have been staging ‘flash mobs’ across the city this week, with police breaking up the meetings and detaining demonstrators. Two key leaders of this “people’s stroll”, Alexei Navalny and Sergei Udaltsov, were sentenced to 15 days in jail on Wednesday for disobeying police orders.

Separately, many opposition groups have decried Putin’s decision to provide a logistics facility in central Russia to Nato as a betrayal of national interests. The facility in Ulyanovsk is to support the US-led mission in Afghanistan.

Russia does not border on Afghanistan, but the two countries are separated only by former Soviet Central Asian republics that have porous borders with Russia and Afghanistan.

Putin is also facing criticism for Russia’s impending membership of the World Trade Organisation. Hailed by some as a long-awaited achievement, Russia’s membership of the WTO has caused concerns within the country that its new trade status will hurt heavily subsidised industries, including agriculture.