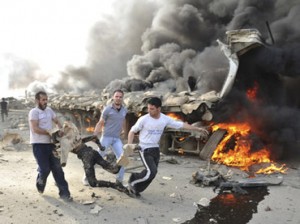 Two strong explosions ripped through the Syrian capital Thursday, killing or wounding dozens of people and leaving scenes of carnage in the streets in an assault against a center of government power.

The blasts, which ripped the facade off a military intelligence building, happened at about 7:50 a.m. when employees are usually arriving at work. The outer wall of the headquarters collapsed, although the structure inside appeared intact.

CBS News’ George Baghdadi says human remains and badly burned bodies littered the streets after the explosions, which also destroyed as many as 40 cars and pickup trucks. Syrian Ministry of Interior says 70 people were killed by the explosions, including 15 whose bodies were completely torn apart. Another 372 were wounded, including civilians and members of the military, the ministry added.

Baghdadi says the explosions appear to have targeted the so-called Palestine intelligence branch, and an aviation headquarters.

The Syrian government blamed “terrorists” and said dozens were killed or wounded, most of them civilians. The leading opposition group, however, the Syrian National Council, cast blame on the government itself, according to Al-Arabiya television. The opposition has previously accused the Assad regime of carrying out large bomb attacks targeting government workers and buildings.

The actual culpability in the previous attacks has remained impossible to verify independently, given the restrictions on foreign media in Syria.

“The explosions shook the house; it was frightening,” Mohhamed Ali, a local resident, tells CBS News. “I saw tens of bodies burned and dozens of wounded, mostly from the security (services)” he added. “I live a few hundred meters (yards) away but I saw some fingers in my neighborhood. The blast was huge.”

Baghdadi says ambulances and other emergency vehicles were still working among the carnage as heavy earthmoving equipment began to clear the rubble. A crater about a yard and a half across and two yards deep could be seen at the spot where one off the blasts went off.

Central Damascus is tightly under the control of forces loyal to President Bashar Assad but has been struck by several bomb attacks, often targeting security installations or convoys.