Greece at new risk of being pushed off euro 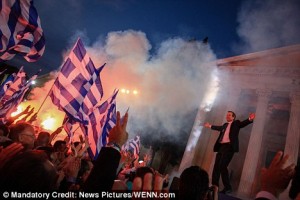 It took months for international finance officials to piece together a bailout that was acceptable to Greek leaders. But it took voters just 12 hours at the polls to deal it a hard blow, leaving Greece on Monday at renewed risk of being pushed off the euro currency once and for all.

Infuriated by demands for harsh spending cuts that could exacerbate a crippling recession, Greek voters on Sunday overwhelmingly rejected politicians who had supported the $171 billion bailout that is keeping the country from bankruptcy. After just hours of trying to form a coalition government Monday, Antonis Samaras, head of the top-vote-getting New Democracy party, gave up, giving an anti-bailout party a stab at it.

But European leaders showed little inclination to back down from their austerity demands, setting the stage for a clash over Greece’s future that could quickly spread beyond the country’s borders.

Other vulnerable nations such as Spain and Italy could be affected by a renewed sense that euro-zone membership isn’t necessarily permanent. And the United States’ fragile economic recovery also could face head winds coming over the Atlantic, even as new voices such as French President-elect Francois Hollande give fresh strength to arguments that Europe should focus more on growth and less on austerity.

A confrontation between Greece and its European lenders could come as soon as next month. Greece had agreed to implement many tough austerity measures, such as cutting health-care spending by June 30, and to find an additional $19 billion in savings for next year. The already difficult prospect of meeting that deadline now appears impossible as the country struggles to find new political leadership after the divisive weekend vote that punished two long-dominant parties and bolstered those on the far left and far right.

With the pro-business New Democracy party failing to form a coalition Monday, the second- and third-place parties will each be given a chance to form a coalition. If they do not succeed, Greece’s president will try to broker one. Most politicians and political analysts here expect those efforts to fail, forcing new elections in June and allowing little work on the country’s pressing economic problems.

Meanwhile, Greece’s coffers continue to empty, and with failure to act on required austerity measures likely to block a scheduled $39 billion bailout installment in June, it will probably be bankrupt soon after. If Greece runs out of euros, it would be forced to start printing drachmas, which economists say would quickly devalue against the stronger common currency.

Europe’s top leaders gave no indication Monday that they would allow Greece any wiggle room, and one, Austrian Chancellor Werner Faymann, warned of the possibility of Greece exiting the euro zone.

In Germany, where taxpayers bear the biggest burden of paying for the bailout, Chancellor Angela Merkel said Monday that she would hold Greece to its previous agreements.

“Obviously, it is of utmost importance that the programs we have agreed on with Greece are continued,” she told reporters in Berlin. “The process is a difficult one, but despite that, it should go on.”

Whether it will is another question. Only a third of Greek voters chose the two pro-bailout parties Sunday, even though opinion polls indicate that a solid majority of the country still favors European Union membership and the continued use of the euro. Some analysts in Athens said that some voters were motivated by disgust with the current political system and that now that their point has been made, the next vote might allow for cooler heads to prevail.

“You hope that in this month, some things will happen to influence the voters and change the political landscape,” said Loukas Tsoukalis, president of the Hellenic Foundation for European and Foreign Policy, a think tank. But he said that if continuing with the euro appears to spell deeper recession, “perhaps the country will commit suicide” by choosing parties that are opposed to it.

That would mean uncertain consequences for Greece and for the world. If Greece were to run out of money, its banks would go bust, leveling the country’s financial system. Without an organized response from the euro zone, bank runs could occur in other struggling countries such as Spain and Italy, if citizens there fear they are next.

“The fact that a country could leave the euro would immediately raise the presumption that it could happen again,” said Fernando Fernandez, an economist at the IE Business School in Madrid. “And financing costs would increase, making it a self-fulfilling prophecy.”

Many Greeks hope it will not come to that, and International Monetary Fund President Christine Lagarde appeared to give mixed indications Monday about how much leeway a new Greek government might have.

Without specifically mentioning Greece, Lagarde said in a copy of a speech prepared for delivery in Zurich that austerity was “essential” to get deeply indebted countries back on track but that it “holds back growth, and the effects are worse in downturns. So the right pace is essential.”

“Some countries under severe market pressure have no choice but to move faster,” she said. “On the whole, however, adjustment should be gradual and steady.”

Nervous investors in Europe initially drove down the euro and sent stock markets falling across the region Monday morning, with the currency sliding against the dollar, briefly touching a four-month low at $1.295. Markets were boosted later in the day by data showing that factory orders in Germany — by far the largest economy in Europe — unexpectedly surged in March.

Greek leaders have said that they hope to negotiate for an extra year in which to complete extensive plans for privatizations, public-sector layoffs and improved tax collections, giving them until 2015 to get it all done. With unemployment above 21 percent and rising, and the country in its fifth year of recession, leaders say that the bailout measures have exacerbated short-term pain even if they yield longer-term benefits.

“There is a sense that Greece has passed its pain threshold,” said George Pagoulatos, a senior adviser to Prime Minister Lucas Papademos. “The Greek economy will continue the adjustment necessary to recover fiscal sustainability and competitiveness within the euro, but it also needs some oxygen in order to breathe.”