Jumblatt: We’ll challenge them at the Ballot boxes 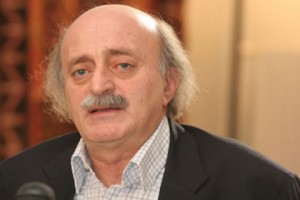 During a rally on Sunday in Sawfar, Mt Lebanon organized by the Progressive Socialist Party to honor its veterans , PSP leader MP Walid Jumblatt challenged Free Patriotic Movement leader MP Michel Aoun by telling him without mentioning him by name We will challenge you at the Ballot boxes in the upcoming parliamentary elections

He accused him and his allies of seeking to “take control of all the country’s assets, of the administration, judiciary, army and economy.”

Aoun launched another attack against Jumblatt during a ceremony on Saturday marking the seventh anniversary of his return from exile in France.

“Jumblatt is now saying that proportionality is aimed against the Druze, and by doing so he is agitating the Druze sensitivities.”

Aoun added that the adoption of an electoral law based on proportional representation would reflect Jumblatt’s real political weight.

“[Jumblatt] said that he spent 25 years lying to the Syrian regime, so how are we supposed to trust that he is going to be truthful with us?” Aoun asked.

Aoun wrapped up his criticism of Jumblatt by saying that the latter “lived for lying.”

“We will challenge them at the ballot boxes. Th main issue is”To be or not to be,” Jumblatt added.

Addressing his party’s veterans, Jumblat said: “Do you remember when you shelled the Syrian army and confronted it” during the civil war?

Jumblatt paid tribute to all the martyrs:

“The martyrs of the Phalange Party and the Lebanese Forces fell in the Mountain War, because each of them defended Lebanon in their own way.” Addressing his party veterans he said” “Do you remember when you shelled the Syrian army and confronted it” during the civil war?

He also said that the PSP did not regret “paying an expensive price” to prevent strife in the country.

“We do not regret this,” Jumblatt said, and reiterated his call to hold dialogue among Lebanese parties.

The MP added that the party acted “calmly,” and voiced the importance of civil peace.