33 killed in Syria including a man, his wife and son 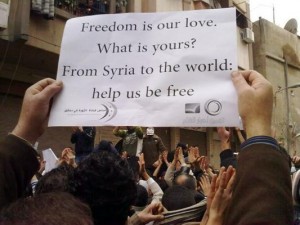 Syrian government snipers and other forces stalked opponents in homes and neighborhoods Friday in a campaign of gunfire, shelling and arrests amid mass protests against the rule of President Bashar al-Assad, an opposition group said.

t least 33 people died in the violence, including seven in Idlib, seven in the Tadamon neighborhood in Damascus, six in Hama, five in Homs, four in Aleppo, two in Deir Ezzor, one in a Damascus suburb and one in Daraa, according to the opposition Local Coordination Committees of Syria.

Three of the victims in Idlib died from torture after their arrest several days earlier, the organization said. The three had been held at an environmental development center that had been transformed into a jail, the group said.

In the town of Anadan in Aleppo province, security forces stormed a home and killed a man, his wife and son, the opposition group said. Local activists said they will be buried after Friday prayers.

In the town of Anadan in Aleppo province, security forces stormed a home and killed a man, his wife and son, the opposition group said.

In Habeet, in Idlib province, activist Ahmed Salem told CNN by telephone that participants in a “huge protest” were chanting the names of students who died in violence Thursday at Aleppo University. He said security forces were firing on people approaching the city gates, but no forces were inside the town.

The new attacks came a day after violence flared at the sprawling Aleppo University in the country’s largest city, one of several schools where anti-government protests have erupted recently. Seven were killed at the university Thursday.

CNN cannot independently verify reports of violence and deaths within Syria because the government has restricted access by most of the international media.

The latest attacks brought forth new doubts about the regime’s willingness to comply with the peace plan put forward by Kofi Annan aimed at ending the 14-month uprising.

But a spokesman for Annan, a U.N. and Arab League joint special envoy, said Friday that it will take some time for the plan to take hold.

“The Annan plan is on track and a crisis that has been going on for over a year is not going to be resolved in a day or a week,” spokesman Ahmed Fawzi said. “Sadly, time is a luxury that we don’t have. But realistically, it’s going to take a little more time to pull all the strings together, but rest assured that they are being pulled together.”

There are no big signs of compliance with the plan, he admitted, but he said there are small signs. For instance, some heavy weapons have been withdrawn and some violence has receded, he said.

“There are signs on the ground of movement, albeit slow and small,” Fawzi said.

The head of the U.N. mission in Syria, Gen. Robert Mood, said the government is allowing the observers access and the team has seen more commitment to the cease-fire plan.

“What my observers have seen is that, in specific locations, we have seen more commitment on the ground by the government,” Mood said. “We are seeing positive signs on the ground.”

Activists in the city of Maaret Nouman in Idlib province reported that a group of U.N. observers arrived “suddenly” on Friday and met with residents there.

The cease-fire nominally went into effect April 12. It is part of a six-point peace plan negotiated by Annan.

The plan includes the government allowing humanitarian groups access to the population, releasing detainees, starting a political dialogue and withdrawing troops from city centers — a mandate the government has not met, according to the United Nations.

Dozens of unarmed military observers are in Syria. A total of 300 are expected to be in the country by the end of the month to monitor the cease-fire and the peace plan.

The United Nations estimates that at least 9,000 people have died in the conflict while opposition groups put the death toll at more than 11,000.