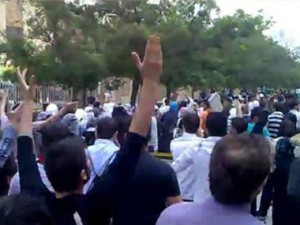 Syrian forces opened fire on thousands of protesters in Aleppo Friday, killing a teenager, after a raid on dormitories at the city’s main university killed four students and forced the closure of the state-run school.

An Aleppo-based activist said the protests were the largest the city has seen since the start of the uprising against President Bashar Assad in March 2011.

“The people are incensed by what happened at the university,” said the activist, Mohammed Saeed. “Everyone wants to express solidarity with those students.”

“With our blood, we sacrifice for you students!” people shouted.