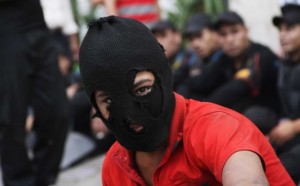 Protesters have been camped outside the Defense Ministry for days demanding an end to the military rule that replaced President Hosni Mubarak, the longtime authoritarian leader ousted 14 months ago in a popular uprising.

Most of the protesters were supporters of disqualified presidential candidate Hazem Salah Abu Ismail, an ultraconservative Islamist. He was barred from running because his late mother held dual Egyptian-U.S. citizenship, something that rendered him ineligible under election laws.

Several presidential candidates announced the suspension of their campaigns, accusing the military rulers of failure to stop the bloodshed. Several key political parties, including the powerful Muslim Brotherhood, also boycotted a meeting with the ruling generals in protest. The meeting, however, went ahead as scheduled to discuss efforts to create a panel to draft a new constitution.

“We blame the military council for the bloodshed,” Osama Yassin of the Brotherhood’s Freedom and Justice Party told state television.

On the boycott of the meeting with the generals, another Freedom and Justice Party leader, Essam el-Erian, said: “It is not possible for us to talk now while blood is being shed just meters away.”

The violence also led to the cancellation of the first presidential debate, which was scheduled for Thursday night and is to be televised nationwide. The debate will pit Mr. Mubarak’s longtime foreign minister, Amr Moussa, against moderate Islamist Abdel-Moneim Abolfotoh. Both are considered front-runners in the race.

It also set off speculation that the ruling generals may be behind the violence as a pretext to cling to power. But state television quoted Gen. Sami Anan, the chief of staff, as saying the military was ready to step down after the first round of presidential election on May 23-24 if it produces an outright winner.

It is highly unlikely that any of the 13 candidates will secure the 50 percent-plus of the votes cast in the first round to be declared the outright winner. A runoff between the top two would be held June 16-17, and the winner would be announced June 21.

Egypt has been plagued by sporadic bouts of violence, often surrounding anti-government protests, in the transitional period following the uprising. More than 100 people have been killed in that time. Critics accuse the ruling generals of badly bungling the shift to democratic rule and of acting too much like the former autocratic regime.

The disqualification of three leading presidential candidates recently raised tensions in the country ahead of the May 23-24 vote, the final step in the democratic transition. Islamists have emerged as the dominant political force in the country in the post-Mubarak period, taking control of parliament with a strong majority.

The ruling military council has promised to hand over power to a civilian administration by July 1, but that has not stopped rallies demanding that the generals leave immediately.

Security officials said the clashes broke out at dawn when assailants set upon several hundred protesters who had camped out in the area since early Saturday. Hospital officials said nine of the 11 killed died of gunshot wounds to the head. The other two were stabbed to death.

It was not immediately clear if the victims were all protesters or if any of the attackers were among the dead.

The clashes resumed later in the morning, after a few hours’ lull, but then stopped again when lines of black-clad riot police and army troops backed by armored vehicles moved in to separate the two sides at noon.

The officials said rocks, clubs and firebombs were used in the clashes. Witnesses reported hearing gunshots during the fighting, which lasted several hours. Video footage broadcast on regional television channels showed pitched battles between the two sides on residential streets close to the Defense Ministry in the Cairo district of Abbasiyah, which has emerged recently as a stronghold of Mubarak supporters and backers of the generals who succeeded him.

The rattle of gunshots could be heard in the footage, and bearded Abu Ismail supporters chanted, “Allahu Akbar,” or “God is great,” in Arabic, as others pelted their attackers with rocks. It was not clear who was shooting. Some of the protesters carried clubs, while many wore hard hats to protect their heads from flying rocks.

The protest camp near the Defense Ministry began with only Abu Ismail supporters, but they later were joined by die-hards from various pro-democracy groups. The protesters’ number would swell to up to two or three thousands in the evenings but stayed around 1,000 during the days.

There have been unconfirmed media reports that some of the Abu Ismail supporters brought firearms to their encampment after an attack by assailants earlier this week that left one protester dead.

The security and hospital officials spoke on condition of anonymity because they were not authorized to speak to the media.

Troops and police deployed in the area around the Defense Ministry did not intervene in earlier attacks there and at first did nothing to stop the killings Wednesday, leaving the clashes to continue until noon, when they moved in.

Since the weekend, Egypt’s pro-military state media have said the assailants were residents angered by the disruption caused by the protests to life in their neighborhood. But pro-democracy activists maintain that the assailants operate with the blessing of the police or the military and that they may even be on their payroll.

Wednesday’s attack came hours after the protesters outside the Defense Ministry said they had caught an off-duty army officer who came to the area to look around, an act that must have been taken by the generals as an insult to the armed forces.