Hunger reported in Syria amid unrest 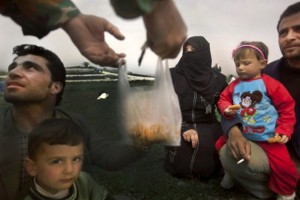 Hundreds of thousands of people are struggling to feed their families in the parts of Syria hardest hit by violence, activists and aid workers say, with access to food cut off by ruined infrastructure, rocketing prices and, say some, security forces who steal and spoil food supplies.

Last month, the World Food Programme dramatically stepped up its operations in Syria, in response to a request from the Syrian Arab Red Crescent society and an assessment that showed worrying levels of hunger in the country.

“We are deeply concerned that as many as half a million people are finding it difficult to get enough to eat, especially in areas most affected by violence,” said Abeer Etefa, a spokeswoman for the World Food Programme. Etefa said that after an assessment by several U.N. agencies, the Syrian government and the Organization of Islamic Cooperation, the group scaled up assistance to reach a quarter-million people last month. The organization is planning to increase that to 500,000 by the end of this month.

“We are deeply concerned that as many as half a million people are finding it difficult to get enough to eat, especially in areas most affected by violence,” said Abeer Etefa, a spokeswoman for the World Food Programme

In Homs and Hama, the opposition-dominated cities where some neighborhoods have been reduced to rubble by months of shelling, residents say that they stand in line for hours to buy bread, while meat and vegetables are rarely available and are anyway unaffordable.

In addition, about 200,000 people have been displaced inside the country since the unrest began, according to a recent study by the Norwegian Refugees Council and the Geneva-based Internal Displacement Monitoring Center, and many of them cannot provide food for themselves, activists say. With much of the influx now in Damascus or its troubled outskirts, volunteers said that they have difficulty feeding the people, many of whom left their homes with few possessions and little money.

‘Homs is a prison now’

After more than a year of unrest as a clampdown on the uprising against President Bashar al-Assad became a bloody conflict, the hungriest areas of Syria are those where fighting has been the most intense, Etefa said. Although the International Committee of the Red Cross has provided some food , its activities have been on a small scale, and it has focused on treating those wounded in the fighting.

“Homs is a prison now,” said one activist, known as Waleed Fares, in the Khalidiyeh neighborhood of the city where opposition to Assad is concentrated and where a military onslaught has been fierce. “Getting bread is very, very difficult; fruit and vegetables are very difficult.”

Those drivers who are still willing to deliver food to Syria’s beleaguered cities have to deal with fuel shortages as well as numerous checkpoints and damaged roads. That has driven up the price of transporting food and contributed to an increase in prices that the World Food Programme estimates at between 20 and 80 percent since the unrest began, at a time when many people have lost their livelihoods because of the violence.

Fares said that military checkpoints have prevented trucks with food from entering the areas of the city where most people support the opposition, with security forces sometimes stealing food and attacking the drivers. His story was echoed by activists in other parts of the country, who were contacted by Skype because the Syrian government restricts journalists’ access to the country.

An activist who uses the name Manhal, in the central city of Hama, said that the food supply, which had been all but cut off, had improved in recent weeks, along with an ebbing in violence as a U.N.-brokered cease-fire has patchily held.

But prices remain high and soldiers frequently take food from bakeries, he said, suggesting that the government was trying to punish areas where rallies are regularly held, “so that the people will feel that the demonstrations brought them this illness,” he said.

“During home raids, soldiers will go out of their way to destroy whatever was in the house, or mix things together to spoil the food,” said one researcher from Human Rights Watch

Some people also say that security forces have purposely destroyed or spoiled the stores of olives, oil, yogurt and preserved vegetables that Syrians often keep in their houses, especially in winter when fresh produce is more scarce.

“During home raids, soldiers will go out of their way to destroy whatever was in the house, or mix things together to spoil the food,” said one researcher from Human Rights Watch, who spoke anonymously because of safety fears, citing interviews with some of the thousands of refugees who have poured into neighboring Lebanon.

Syrian officials did not respond to requests for comment.

The need is also severe, according to the World Food Programme, in rural areas where people were struggling to cope even before the uprising, after four consecutive years of drought and poor harvests.

But with the gap in wealth between drought-stricken rural residents and a prosperous urban elite a crucial part of the discontent that fueled the uprising, the Syrian government is acutely conscious of the need to minimize the rise in food prices, said Jihad Yazigi, a Damascus-based economist who edits the Syria Report Web site.

As sanctions imposed by the United States, European Union, Turkey and some Arab countries have bitten deeper, Yazigi said, imports have slowed and the price of food increased. So the government in March introduced a system of price-fixing for essential foods that has stabilized the cost of bread, sugar and meat — although they remain much higher than they were a year ago.

“The idea was to respond to popular anger at rising prices,” he said.

Despite efforts to mitigate the problem, around half of Syrians may live in poverty, said Salman Shaikh of the Brookings Institute in Doha, who argued that this is increasing anti-government feeling.

“I think the new hardships are certainly blamed on the regime itself,” Shaikh said. “But I would say the general mood is one of anger rather than lying down.”

“People are under the most incredible pressure, but they continue to demonstrate in some of the poorest and hardest-hit areas. There are those who will be yearning for stability but I don’t know if people think they can go back to the status quo.”

Top photo: A member of Free Syrian Army gives some food to a Syrian refugee family as they wait to cross to Turkey at the border between Syria and Turkey on March 26, 2012.