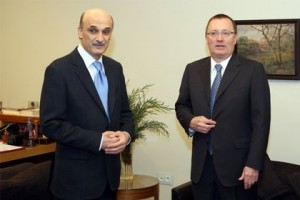 US Assistant Secretary of State for Near Eastern Affairs Jeffrey Feltman who arrived on Tuesday met with senior officials on Wednesday to discuss the political, economic, and security situation in Lebanon, as well as the developments in Syria, a statement issued by the US embassy reported.

The US envoy expressed his country’s “steadfast support for pluralistic and democratic governments in the region that protect the rights of all citizens, including ethnic and religious minorities.” According to the statement

March 14 opposition MP Butros Harb told VOL: “It is in our interest in Lebanon to be informed about the American viewpoint on the events in the region.”

“We don’t live on an isolated island and we should interact with others,” he added , a possible response to the Hezbollah led March 8 politicians who criticized Feltman’s visit. Hezbollah’s number two leader Sheikh Nain Qassem said today: “If Feltmman is here to look for an accomplishment he won’t find it”.

Sources close to Jumblat told the Central News Agency that the talks with Feltman focused on the local and regional political situation.