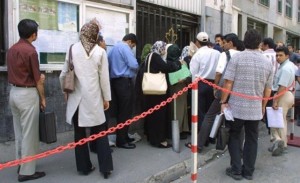 Iran said on Tuesday it may take “reciprocal action” over a decision by Canada to shut the visa section in its Tehran embassy used by thousands of Iranians.

“They have said that the decision was based on cost-cutting measures… but we will follow any action that causes trouble for our citizens,” foreign ministry spokesman Ramin Mehmanparast told reporters in his weekly briefing.

“If anyone takes action against our national interest, we will take reciprocal action,” he said.

Canada’s embassy announced on Sunday via a link on its official website that it had closed its visa section as part of an effort to operate “more effectively and efficiently.”

It said all visa services had been transferred to the Canadian embassy in Ankara, the capital of neighboring Turkey.

The move has angered many Iranians who had been planning to apply for tourist or immigration visas to Canada, with several expressing their discontent on Twitter and other social media.

There are more than 120,000 people of Iranian origin or descent living in Canada, according to official 2006 census data, with thousands of their relatives in Iran visiting them every year.

Iran’s deputy foreign minister, Hassan Ghashghavi, said last week — before Canada’s announcement — that Tehran was poised to open an extra consulate in Canada to supplement the work done by its Ottawa embassy.

Iran was also looking at opening new consulates in Afghanistan, China and Sweden, he said, according to media.

Photo: Iranians wanting to travel to Canada have to now apply for visas from Ankara in Turkey. (AFP)