Migrant workers in Lebanon rally for their rights 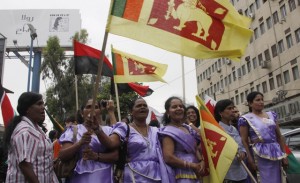 Hundreds of people took to the streets Sunday to demand rights for migrant workers in Lebanon as well as celebrate their cultures and traditions.

The protest was organized by the human rights watchdog, Anti-Racism Movement, with the participation of migrant workers’ communities in Lebanon and several non-governmental organizations.

The parade saw Lebanese residents and expatriates joining in the celebrations with migrant workers from Sri Lanka, Ethiopia, the Philippines, Nepal, Sudan and many other countries as they gathered to dance, sing and chant slogans.

They asked for the abolishment of the sponsorship system in Lebanon that ties the worker to one employer for the tenure of their contract, making it hard to change jobs or be independent.

According to Ghada Jabbour, Head of the Exploitation and Trafficking of Women Unit at KAFA, a Lebanese NGO highly involved in women’s rights and domestic workers issues, and an influential organizer of Sunday’s parade, the demands are clear.

“We want to abolish the sponsorship system that ties the domestic worker to the employer so that he or she can have control over the life and residency of the worker.

We also want migrant domestic workers to work under the Lebanese labor law so they can benefit from all the rights guaranteed by the law such as a decent living, vacations, termination of contract, minimum wage etc.,” she said

From Dora to St. Joseph’s Church in Monnot Street, the protesters marched to the beat of the drummers, chanting and holding banners that read “Workers not slaves” or “The sponsorship systems kills (…)Kill it.”

The protest was held on Sunday, two days ahead of International Workers’ Day, since most migrant workers in Lebanon will only get Sunday off, if they get time off at all.

Diala Haidar, an activist who participated in the event described it as a “success.”

“Migrant workers themselves marched against the sponsorship system (kafala). It means that they are aware of their rights and that they are standing for them which is the pillar for change,” she said.

“The parade also portrayed another side of Lebanese society which has been described as highly racist when it comes to the plight of domestic workers,” Diala added. “This is essential, but not enough to recover from a collective shame.”

“Some people who unfortunately don’t think beyond their homes were meeting and seeing migrant workers for who they truly are, and not just as workers. By parading in the streets, and marching in popular neighborhoods, locals were introduced to the cultures, traditions and histories of every workers’ country.”

It wasn’t easy for Rohini Premalata to leave her village in Sri Lanka and her two children, Rasika and Rechil, both very young, but the economic necessity forced her to move to Lebanon, a country she had never visited before, and one whose language she didn’t speak.

It was 19 years ago when someone last called her Rohini. Her new employer, living in a suburb of Beirut, changed her name to that of her last domestic helper because it was easier for her to remember it.

Rohini changed several homes and employers during that first year, before settling in with one family; sometimes having to escape and being prosecuted by the authorities since her passport was in custody of her employer.

Today, she is a grandmother, as both Rechil and Rasika have married and had their own children.

Yet, Rohini cannot return home as she fears her daughter may also have to leave her family and work in a foreign country for financial reasons.

On Sunday, Rohini participated in the migrant workers’ parade and chanted for rights to live in dignity and justice.

But not every migrant worker was lucky enough to participate in the parade like Rohini.

Her public mistreatment was recorded on video, and spread widely on television and on the Internet, raising outrage from both human rights organizations and citizens.

“Unfortunately, death cases of migrant workers are quite common,” said Ghada. “There is approximately one case of death per week, most of the cases being registered as suicides.”

In a report released by Human Rights Watch last March, a study conducted by the organization in 2008 found that during the period examined, there had been an average of one death a week due to “unnatural causes among domestic workers in Lebanon, including suicide and falls from tall buildings.”

Photo: Sri Lankan migrant workers carry their national flag during a parade in Beirut, to support the rights of migrant domestic workers in Lebanon, ahead of May Day. (Reuters)