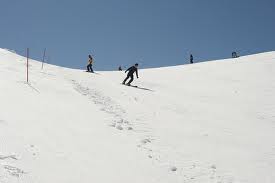 Antoine al-Hajj A Lebanese man was wounded on Monday when Syrian troops opened fire at him and 3 others as they were skiing in Mount Hermon in the Rashayya district, National News Agency reported.

Hajj was shot in the shoulder, while three of his companions ( 2 Lebanese and one European) were left unhurt in the incident.

Hajj who comes from Zahle was taken by the Red Cross to the government hospital in Rashayya.

Investigations are underway with his companions to determine the details of the incident.

This is the third such incident this month .

Al-Jadeed ( New TV) TV reported on Sunday that a Lebanese shepherd was killed by gunfire originating from the Syrian side of the Lebanese-Syrian border.

The report said that the shepherd, identified as Jassem Bou Eid, was tending to his flock in the Hermel region in Lebanon’s Bekaa Valley when shots were fired across the border with Syria.

Al-Jadeed cameraman, Ali Shaaban, was killed on the Lebanese side of the Syrian borders reportedly by Syrian army troops early April.