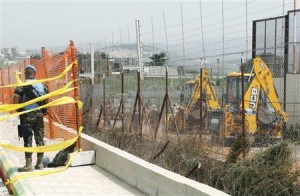 The Israeli army has begun building a wall that will run several kilometres along part of its border with Lebanon, a military spokeswoman has said.

“This construction, which began on Monday, is being carried out in co-ordination with UNIFIL (the United Nations Interim Force in Lebanon) and the Lebanese army,” she said. “The wall is intended to avoid frictions on the border.”

Israeli public radio said the wall would be several metres high and was intended to protect the Israeli border town of Metulla from fire coming from the Lebanese side. It is expected to take several weeks to build.

In an interview with Lebanese daily, Al Akhbar, last month, the Lebanese army said that as the wall would be located beyond the border on the Israeli side, [the army] adopted a position of neither accepting nor rejecting the wall, but deeming it to not be of its concern.

Israel’s military announced the project in January, saying it would protect recently-constructed apartment blocks in Metulla from sniper fire coming from the Lebanese border town of Kfar Kila.

Israel and Lebanon are technically at war but military officers from the two sides meet regularly under the auspices of UNIFIL to co-ordinate security along their joint border.

Israel fought a devastating war against Lebanon in 2006, which cost the lives of 1,200 people in Lebanon, mainly civilians, and 160 Israelis, mostly soldiers.