Suleiman in Chouf to offer condolences to Druze community 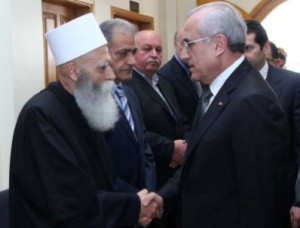 President Michel Suleiman on Sunday visited the town of Baaqlin in the Chouf region of MT Lebanon  to offer his  condolences to the Druze community over the the death of  their highest spiritual authority  Sheikh Abu Mohammad Jawad Walieddine, who died Friday morning at the age of 96.

Sheikh Walieddine, who was born in Baaqlin in 1916 , spent his life there and assumed the top post  as  highest spiritual authority after the death of Sheikh Abu Hassan Aref Halawi on November 24, 2003.  He was known as the “Sheikh of the Jazeera,” or northern Arabian peninsula, for his leadership of Druze in Lebanon, Syria, Jordan and Palestine. Walieddine was also known as the “Lion of the Chouf” for his courage … He reportedly was living in his house without any guards during the civil war and his door was open for all visitors all the time.

He was the symbol of peace for his community. Throughout the Lebanese civil war the sheikh  worked hard at sectarian coexistence.