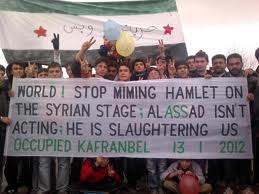 AS the ceasefire in Syria crumbles, the horror scenario that many had feared looms: a full-scale civil war.

The likelihood of the ceasefire succeeding was always low. UN Secretary-General Ban Ki-moon yesterday confirmed that the deal was collapsing, saying he was “gravely alarmed” by the shelling of opposition groups by the regime. More than 100 people are believed to have been killed since the so-called ceasefire came into force two weeks ago.

Despite promises to do so, Syrian President Bashar al-Assad has not withdrawn his troops and heavy weapons from population centres.

Assad made a fateful choice a year ago. He could have taken the course of his neighbour in Jordan, King Abdullah, who chose genuine political reform and smart economic management, or he could have chosen brute force. He chose brute force, apparently under the advice of Iranian President Mahmoud Ahmadinejad.

He has done better than many expected. On one side is a military dictatorship made up largely of old men with previous form when they organised the slaughter of up to 20,000 people in Hama in 1982.

On the other side is a population with few rights who have grown to despise those governing them.

If Annan has had any success it has been to stress to Russia and China – among Syria’s few remaining supporters – that they could not simply stand back and wash their hands of this strategic and humanitarian crisis.

Both these superpowers had dismissed several efforts by the UN Security Council to call for Assad’s resignation, but Annan appears to have convinced them that the situation in Syria will not solve itself.

The depth and breadth of the hatred of the regime by its opponents is too marked. And the survival instinct of Assad supporters – largely from the Alawite minority from which the regime is drawn – is also powerful.

Assad, and his fellow Alawites who make up the top of the regime, know their lives are in danger should the regime fall.

The Syrian crisis has a strong sectarian element – the uprising is being driven by Sunni Muslims, who make up about 75 per cent of the population. The Alawites make up about 10 per cent and Christians 10 per cent.

Many in the international community mistakenly saw Assad as a reformer. The same military men who urged his father, Hafez al-Assad, to undertake the massacre in Hama are still in control of the military and security apparatus.

Their reality is simple: should the regime fall, they face retribution not just for the current atrocities but also those of 1982. Many could be pursued by the International Criminal Court.

It’s worth recalling what happened in 1982: tanks surrounded Hama and simply shelled neighbourhoods day after day in an indiscriminate killing of civilians because of their possible support for the Muslim Brotherhood.

Like father, like son. Despite all his swanning around international capitals with his glamorous British-born wife Asma, when his moment of truth came, the President proved as prepared to approve mass murder as his father.

Some observers argue Bashar al-Assad was simply not able to stand up to the military.

Even if that is true, it will not save him. With the collapse of this ceasefire, Syria now faces a long civil war.

It is difficult to see Assad surviving. One way or another – either by the collapse of the regime or his assassination by a dissident military officer – his future looks as grim as that of his country. He appears to have decided that if he is going down, the country is going with him.