by yalibnan
479
By: Charles Krauthammer Last year President Barack Obama ordered U.S. intervention in Libya under the doctrine of “Responsibility to Protect.” To stand by and do nothing “would have been a betrayal of who we are,” explained the president. But what has he done for Syria? Stand idly by.
Share: 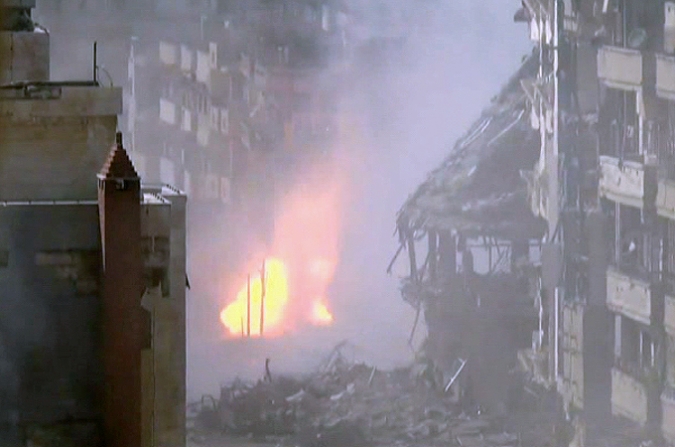 Last year President Barack Obama ordered U.S. intervention in Libya under the grand new doctrine of “Responsibility to Protect.” Moammar Gadhafi was threatening a massacre in Benghazi. To stand by and do nothing “would have been a betrayal of who we are,” explained the president.

In the year since, the government of Syria has more than threatened massacres. It has carried them out. Nothing hypothetical about the disappearances, executions, indiscriminate shelling of populated neighborhoods. More than 9,000 are dead.

Yes, we’ve imposed economic sanctions. But as with Iran, the economic squeeze has not altered the regime’s behavior. Monday’s announced travel and financial restrictions on those who use social media to track down dissidents is a pinprick. No Disney World trips for the chiefs of the Iranian and Syrian security agencies. And they might now have to park their money in Dubai instead of New York. That’ll stop ’em.

Obama’s other major announcement – at Washington’s Holocaust Museum, no less – was the creation of an Atrocities Prevention Board.

I kid you not. A board. Russia flies planeloads of weapons to Damascus. Iran supplies money, trainers, agents, more weapons. And what does America do? Support a feckless U.N. peace mission that does nothing to stop the killing. (Indeed, some of the civilians who met with the peacekeepers were summarily executed.) And establish an Atrocities Prevention Board.

With multiagency participation, mind you. The liberal faith in the power of bureaucracy and flowcharts, of committees and reports, is legend. But this is parody.

Now, there’s an argument to be made that we do not have a duty to protect. That foreign policy is not social work. That you risk American lives only when national security and/or strategic interests are at stake, not merely to satisfy the humanitarian impulses of some of our leaders.

Obama insists that we can only act with support of the “international community,” meaning the U.N. Security Council – where Russia and China have a permanent veto. By what logic does the moral legitimacy of U.S. action require the blessing of a thug like Vladimir Putin and the butchers of Tiananmen Square?

But Obama does not make this argument. On the contrary. He goes to the Holocaust Museum to commit himself and his country to defend the innocent, to affirm the moral imperative of rescue. And then does nothing of any consequence.

His case for passivity is buttressed by the implication that the only alternative to inaction is military intervention – bombing, boots on the ground.

But that’s false. It’s not the only alternative. Why aren’t we organizing, training and arming the Syrian rebels in their sanctuaries in Turkey? Nothing unilateral here. Saudi Arabia is already planning to do so. Turkey has turned decisively against Assad. And the French are pushing for even more direct intervention.

Instead, Obama insists that we can only act with support of the “international community,” meaning the U.N. Security Council – where Russia and China have a permanent veto. By what logic does the moral legitimacy of U.S. action require the blessing of a thug like Vladimir Putin and the butchers of Tiananmen Square?

Our slavish, mindless self-subordination to “international legitimacy” does nothing but allow Russia – a pretend post-Soviet superpower – to extend a protective umbrella over whichever murderous client it chooses. Obama has all but announced that Russia (or China) has merely to veto international actions – sanctions, military assistance, direct intervention – and the U.S. will back off.

For what reason? Not even President Bill Clinton, a confirmed internationalist, would acquiesce to such restraints. With Russia prepared to block U.N. intervention against its client, Serbia, Clinton saved Kosovo by summoning NATO to bomb the hell out of Serbia, the Russians be damned.

If Obama wants to stay out of Syria, fine. Make the case that it’s none of our business. That it’s too hard. That we have no security/national interests there.

In my view, the evidence argues against that, but at least a coherent case for hands off could be made. That would be an honest, straightforward policy. Instead, the president, basking in the sanctity of the Holocaust Museum, proclaims his solemn allegiance to a doctrine of responsibility – even as he stands by and watches Syria burn.

If we are not prepared to intervene, even indirectly by arming and training Syrians who want to liberate themselves, be candid. And then be quiet. Don’t pretend the U.N. is doing anything. Don’t pretend the U.S. is doing anything. And don’t embarrass the nation with an Atrocities Prevention Board. The tragedies of Rwanda, Darfur and now Syria did not result from lack of information or lack of interagency coordination, but from lack of will.