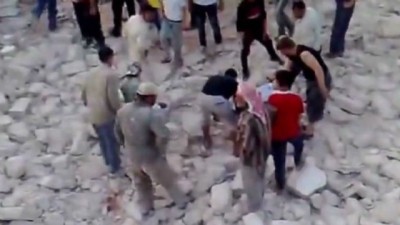 A suicide bombing in a Damascus neighborhood killed nine and injured tens of people, Syrian state media said Friday. It was the second bomb blast to rock the Syrian capital Friday.

The deadly attack came as a two-week-old peace deal continued to unravel.

The suicide attack happened in the district of Midan in Damascus, state television reported. The state-run news agency called it a “terrorist bombing” that resulted in “a number of victims and injuries.”

Earlier, a separate blast hit the industrial region in the capital, the opposition Syrian Observatory for Human Rights said. It was unclear whether there were any casualties in that blast.

Elsewhere in Syria, an explosion injured three security personnel in the coastal city of Banias.

Syria consistently blames “armed terrorist groups” for the violence that has wracked the country for 13 months.

The government accusations came as an opposition group said it has documented hundreds of deaths since the United Nations’ peace plan monitors arrived.

At least 462 people have been killed since April 16, when the mission started, the opposition Local Coordination Committees of Syria said Thursday. The number includes 34 children.

The international community said Syria has not met its commitment to withdraw its troops and heavy weapons from population centers.

U.N. Secretary-General Ban Ki-moon expressed frustration with the Syrian government Thursday, saying it has not followed through on its agreement to withdraw troops from cities and towns. Ban is “gravely alarmed by reports of continued violence and killing,” the secretary-general said in a written statement.

The plan calls for President Bashar al-Assad’s government and the opposition to end the bloodshed, allow humanitarian groups access to the population, release detainees and start a political dialogue. Annan is the U.N. and Arab League envoy to Syria.

The U.N. Security Council recently authorized sending up to 300 monitors to Syria for 90 days. But as of this week, only 13 were in Syria.

Annan has said that the Syrian foreign minister told him heavy weapons and troops had been withdrawn from population centers and military operations had ended.

But reports of shelling and fighting are unabated, with at least 35 killed Thursday, many of those deaths in Deir Ezzor, the Local Coordination Committees said.

“This is among the deadliest attacks, and is further proof that the Assad regime has no intention of implementing the Annan plan,” said Rafif Jouejati, a spokeswoman for the committees.

In his statement, Ban said he is “alarmed” by continued violence and killing in Syria, including shelling and blasts in various residential areas.

The secretary-general is “deeply troubled” that weapons, military equipment and troops have not been withdrawn, his office said.

Ban urged the government and opposition to ensure conditions for effective operation of the observers are enforced immediately, including cessation of armed violence and withdrawal of military equipment and troops from residential areas.

Violence has raged between al-Assad’s forces and the opposition for 13 months in a battle that has seen thousands of civilians killed amid a number of international attempts to broker a peace deal.

CNN cannot independently verify reports of violence and deaths within Syria, as the government has restricted access by international media.

The United Nations estimates at least 9,000 people have since died in the conflict, while activist groups put the death toll at more than 11,000.

Meanwhile, a delegation from Syria’s Popular Front for Change and Liberation opposition movement met with the Russian foreign minister Thursday.