Kurds too joined the fighting against Assad regime, report 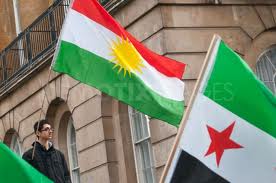 Amid the escalation of violence in Syria as a cease-fire orchestrated by UN and Arab League special envoy Kofi Annan seems not to be observed, several Kurdish groups in the north of the country have begun to take up arms to defend themselves against the Kurdistan Workers’ Party (PKK), which acts as the extension of Syrian President Bashar al-Assad’s regime.

As Damascus continued to pound the strongholds of opposition forces across the country, the UN sent a new team of observers to Syria last week to monitor the implementation of the cease-fire agreement amid growing suspicions as to the intentions of the regime to abide by the plan.

At the same time, the stance of Kurdish groups is complicating the situation in Syria as possible shifts in their position have the potential to change the balance of power in the country.

The presence of the PKK in Syria’s Kurdish region has deterred some groups that are strongly against the regime in Damascus from joining opposition protests. However, there are signs the Kurdish groups in Syria are beginning to resist PKK pressure.

In some parts of northern Syria, dissidents who are not affiliated with the PKK are arming themselves against the PKK-affiliated Democratic Union Party (PYD) and joining the ranks of the Free Syrian Army (FSA). Local sources have reported clashes between PYD militants and Kurdish opposition groups.

When the first protests in Syria against Assad were held in March last year, the Kurds, who had suffered the most from decades of oppression by the Assad regime, also poured into the streets in protest of Damascus. Thousands of Kurds demanded an immediate stop to Assad’s forces firing against civilian protestors and a transition to a democratic system. In response to this growing opposition in the northern parts of the country, the Assad regime did not send the army to crush the protests but allowed the PKK to revive its presence in the area and to debilitate the Kurdish opposition to the regime.

This alliance has borne fruit as the number of protests drastically dropped as result of pressure by the PYD in the north. PKK-PYD militants have established checkpoints at the entrances to the cities of Qamishli and Afrin, although sometimes deny entry to Kurds who not affiliated with the PYD. They check people’s identities in the streets and threaten the local Kurds to prevent them from joining the protests against Assad.

In some parts of Qamishli, Kurdish opposition groups are supported by local residents and organize rallies against Damascus. However, these protests can pose a great risk to the individuals who participate, as PYD militants are able to identify them to later question or even torture.

According to residents of Qamishli, the PYD has formed a group similar to Assad’s Shabiha — a paramilitary group accused of violently attacking the Syrian people. Locals claim that Kurdish Shabiha members have assassinated people in northern Syria.