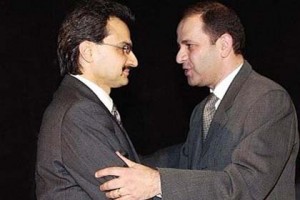 This comes after LMH announced its decision to shut down its Production and Acquisition Company (PAC) television production facility and operations in Lebanon on April 12 citing significant losses as the reason.

According to LMH, this decision was related to the refusal of Lebanese Broadcasting Corporation International (LBCI) to pay amounts due to LMH under production sharing arrangements between the two companies.

“The failure of LBCI to pay for programming produced by PAC and the ensuing disputes with the head of LBCI and former-head of PAC and Rotana TV, Mr. Pierre El Daher, have resulted in the inability of PAC to pay the salaries of its employees and continue to sustain the ongoing costs of production and operations,” LMH said in a statement.

According to the al Liwa report the tension between Daher and the prince has recently escalated. Some unconfirmed reports say that Prince Waleed and Daher are currently suing each other.

Prince Waleed was listed recently by Forbes as the richest man in the Arab World.