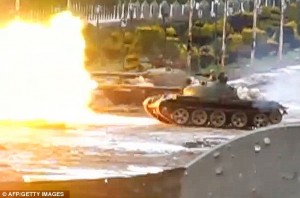 France raised the prospect of military intervention in Syria on Wednesday, saying the U.N. should consider harsher measures if an international peace plan that has been shaken by violence ultimately collapses.

The statement reflects mounting international frustration with daily attacks that have kept a cease-fire between troops loyal to President Bashar Assad and armed rebels seeking to oust him from taking hold.

Activists said government troops killed at least 29 civilians Wednesday, including 12 killed in shelling in the central city of Hama.

French Foreign Minister Alain Juppe said France had discussed invoking Chapter 7 of the U.N. Charter, which can be enforced militarily, with other world powers. U.S. Secretary of State Hillary Clinton said last week the United Nations should move toward such a step to allow for measures like travel and financial sanctions and an arms embargo. She didn’t mention military action. The U.S. has for more than a year opposed the further militarization of the situation.

Any such move, however, would likely be blocked by Russia and China, which have twice used their vetoes as permanent Council members to protect Syria from condemnation and remain opposed to military intervention. Western powers, too, don’t appear interested in sending forces to another Middle East nation in turmoil.

Instead, all parties have backed a peace plan brokered by envoy Kofi Annan that calls for a cease-fire to allow for dialogue between the regime and the opposition on a political solution to the 13-month-old conflict which has killed more than 9,000 people.

That plan, however, has been troubled from the start. Syria has failed to enact key parts of the plan, like withdrawing its forces from cities, and its troops have attacked opposition areas, killing scores of civilians since the truce was to begin on April 12. Rebel fighters, too, have attacked military checkpoints and convoys.

In Paris on Wednesday, Juppe said the plan was “severely compromised” but must go ahead.

“We think this mediation should be given a chance,” he said after a meeting with Syrian dissidents. He called for the full contingent of 300 observers authorized by the Security Council to be deployed in Syria in 15 days and said Annan’s report on the cease-fire scheduled for May 5 will be a “moment of truth” on whether mediation can solve the conflict.

“We cannot allow ourselves to be defied by the current regime,” he said.

In New York, U.N. Ambassador Vitaly Churkin of Russia said he told Moscow that some Security Council members said they had proof that Syria had not withdrawn its forces from cities — as Syria’s foreign minister claimed on April 21.

So far, the observer’s presence has appeared to prevent violence in some areas while exacerbating it in others. The central city of Homs, shelled daily for months by government troops, has been relatively quiet since two observers took up residence in a local hotel.

But activist said regime forces killed more than 30 people in the central city of Hama this week, just one day after residents welcomed observers with an anti-government rally. Now, two observers remain in Hama.

The gunfire killed one civilian, and the observers left without talking to residents, Yazid al-Baradan said via Skype.

The Britain-based Syrian Observatory for Human Rights said three soldiers were killed Wednesday in clashes with rebels in Tafas, as well as one civilian. Al-Baradan denied clashes occurred.

The observers also visited the restive Damascus suburb of Douma for the third day in a row. Activists said each day has seen regime assaults.

Local dissident Mohammed Saeed said troops fired mortar shells and heavy machine guns at the area Wednesday, and electricity had been cut. Streets were largely empty for fear of snipers on rooftops, he said. The Observatory said snipers killed two people there on Wednesday.

Amateur videos posted online showed armored army vehicles driving down streets and dozens of soldiers with assault rifles deploying while gunfire and explosions are heard in the background. Others showed buildings apparently damaged by shelling.

Saeed said local rebels were observing the cease-fire, but videos showed regime soldiers fleeing and shooting their guns as if under fire, suggesting that rebels were fighting back.

The Syrian state news service said a suicide bomber also detonated an explosives-laden car near an army checkpoint in northwestern Syria on Wednesday, killing one security officer, while a roadside bomb exploded in the northern Aleppo province, wounding three.

The Observatory said at least 29 people were killed across Syria on Wednesday, including 12 in a government shelling attack on the neighborhood of Musha al-Tayar on the southern edge of Hama.

A video posted online showed a huge cloud of smoke rising over a neighborhood surrounded by farmland. Other videos showed scores of residents rushing around an expanse of rubble, looking for survivors.

Four people also were killed when soldiers opened fire on their bus in the northern Idlib province, activists said.

Activist and regime claims could not be independently confirmed. The Syrian government prevents most media from operating in the country.

The International Committee of the Red Cross also condemned the death of a local volunteer after he was shot and killed while riding in a clearly marked aid vehicle Tuesday.

The Geneva-based organization said Mohammed al-Khadraa was working for the Syrian Arab Red Crescent in Douma and condemned “the lack of respect for lifesaving medical services in Syria.”

It did not say who shot him. He was the third Red Crescent worker killed in Syria in eight months.