After crashing the White House Salehi running for governor 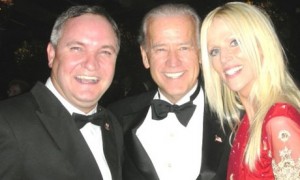 He crashed the White House. Why not the governor’s mansion? Tareq Salahi says he’s running for governor of Virginia.

Salahi told The Post Wednesday that he will run, as a Republican, to avenge a recent lawsuit brought against him by another GOP gubernatorial hopeful: Virginia Attorney General Ken Cuccinelli II.

“Its not part of reality TV. It’s not a stunt,’’ Salahi said in an interview. “It’s real.”

News of his political aspirations were first reported by TMZ, which until now has had more reason than political reporters to be plugged into the polo socialite’s doings.

The development comes just days after Cuccinelli announced that he was suing Salahi over his winery tour business.

Salahi said the lawsuit made him realize just how much taxpayer money politicians waste. And he decided someone else should run for the state’s top job.

When it was filed, Cuccinelli’s suit seemed like further proof that Salahi’s life had fallen to pieces since November 2009, when he managed to sashay past White House security with his wife Michaele on his arm and into a State Dinner.

Then the wife ran away with an ’80s rocker. Tareq Salahi was fined in connection with a charity. And Cuccinelli alleged that Salahi’s wine tour business canceled tours, failed to make promised stops and refused to provide refunds.

Salahi, 42, who lives outside Front Royal and now tends to a smaller vineyard, said that he is returning to his true loves — politics, horses and wine. He said he has some policy proposals, but isn’t ready to reveal them.

Salahi, who describes himself as a moderate Republican, was appointed to a pair of state boards — the Virginia Tourism Authority and the Virginia Wine Growers Advisory Board — by Republican and Democratic governors, James S. Gilmore (R), Mark R. Warner (D), now a U.S. senator, and Timothy M. Kaine (D), now a candidate for U.S. Senate.

Now that Salahi has his eye on the governorship, hmmm, the plot thickens. Are jilted Virginia wine-country tourists really a top concern for the commonwealth’s top law-enforcement official? Do they rank up there with the climate scientist, exposed nipples and purportedly exported District rats that seem to dominate Cuccinelli’s portfolio?

“This is exactly the type of leadership we don’t want in Virginia,’’ he said. “He’s grandstanding. He chooses a small family business. He’s spending tends of thousands of dollars on things that are not warranted.”

Or is Cuccinelli, himself a Republican candidate for governor, merely gunning for a rival?

Cuccinelli stood by the lawsuit.

“Protecting Virginia consumers from fraud is a high priority for me as attorney general, and I take that duty very seriously,” he said via e-mail. “It’s unfortunate that this individual doesn’t take these complaints against his company as seriously as we do. … We’re constantly alerting the public to potential scams so they can avoid them. That’s not seeking publicity. That’s a public service.”

Lt. Gov. Bill Bolling (R), who also is seeking the Republican nomination, responded to a request for comment by way of spokeswoman Ibbie Hedrick.

“The lieutenant governor is focused on creating jobs for Virginia families, not the Salahi-Cuccinelli affair,” she said.

A spokesman for the all-but-announced Democrat in the race, Terry McAuliffe, declined to comment.

Salahi said he knows McAuliffe well and has met both Bolling and Cuccinelli.

Del. David B. Albo (R-Fairfax), who has known Salahi for more than a decade and even made an appearance on “The Real Housewives of D.C.” said his friend told him a while back that he planned to run.

“My friend, Tareq, is an eccentric guy,’’ he said. But Albo said he is unlikely to support Salahi. “I don’t see how anyone without a $1 million can win.”

Salahi said he announced word of his political run via Facebook and Twitter. He said he has already formed an exploratory committee and has staff lined up— but declined to name any except lawyer Charles Roberts from Prince William County.