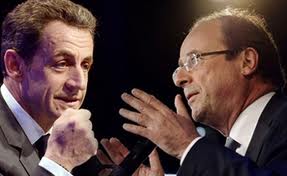 Socialist Francois Hollande and conservative President Nicolas Sarkozy are heading for a runoff in the race for France’s presidency, according to partial official results after a first round of voting Sunday.

The contest, to be resolved in the runoff May 6, could alter the European political landscape as the continent deals with a financial crisis.

Hollande was in the overall lead, amid widespread disappointment with Sarkozy’s first term and a sense that the incumbent favors the rich when the country is struggling with unemployment and bleak economic prospects.

With about 33 percent of the vote counted, Hollande had 27.5 percent of ballots cast and Sarkozy 26.6 percent, according to figures released by the Interior Ministry after final polls closed.

Le Pen, who has campaigned on anti-Islam rhetoric, was in third with 19.9 percent of the vote so far.

Le Pen, predicting a first-round surprise, said in an interview last week with The Associated Press that she would consider it a victory if she matched the first-round score of her father, National Front founder Jean-Marie Le Pen, in 2002. That year, he got nearly 16.8 percent of the vote and was propelled into the final round and a face-off with then-President Jacques Chirac.

In fourth place was leftist firebrand Jean-Luc Melenchon, followed by centrist Francois Bayrou and five other candidates with minimal support.

“Francois for President!” chanted Hollande supporters at a buoyant gathering outside his campaign headquarters in Paris’ Left Bank.

Hollande’s score, “is very good. That’s a very good score in the first round, especially if you are not an incumbent,” said Socialist lawmaker and Hollande supporter Aurelie Filippetti.

The Interior Ministry said early turnout figures showed 70.6 percent of France’s 44-million-plus voters cast ballots before 5pm (1500GMT) — less than the 73.8 percent in 2007 at the same time, but more than in the four previous races.

Overall turnout in the 2007 first round was nearly 84 percent, the highest figure since the 1970s.