Another blast targets a restaurant in south Lebanon, update 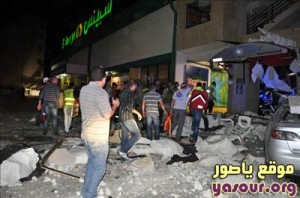 There are unconfirmed reports of casualties as a result of the explosion targeting Nocean restaurant, which is located on Ramel Street, Nabih Bery Boulevard, Tyre, next to McDonald’s restaurant and a Spinneys super market

The Internal Security Forces and ambulances reportedly arrived at the scene .

On November 17 two bombs targeting a nightclub and a liquor store exploded in Tyre (Sour), one of the few areas in South Lebanon where alcohol is available for sale.

One of the bombs targeted the Elissa Queen Hotel on the seafront of the scenic Mediterranean coastal town. 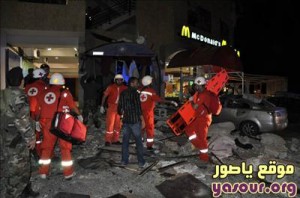 The second bomb struck a shop selling alcohol in the Christian quarters of Tyre, a multi-confessional city especially popular with tourists during the summer season.

Alcohol is not banned in Lebanon, but in areas under the control of the Lebanese Shiite movement Hezbollah liquor is not allowed.

Update II: The number of wounded is seven and not two as originally reported . All the wounded were taken by the red Cross to nearby hospitals in Tyre