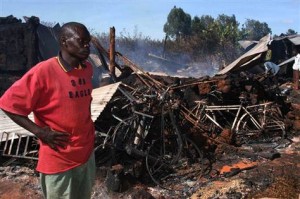 A Muslim mob has set ablaze a Catholic church frequented by Southern Sudanese in the capital Khartoum, witnesses and media reports said on Sunday.

The church in Khartoum’s Al-Jiraif district was built on a disputed plot of land but the Saturday night incident appeared to be part of the fallout from ongoing hostilities between Sudan and South Sudan over control of an oil town on their ill-defined border.

Sudan and South Sudan have been drawing closer to a full scale war in recent months over the unresolved issues of sharing oil revenues and a disputed border.

The witnesses and several newspapers said a mob of several hundreds shouting insults at southerners torched the church. Fire engines could not put out the fire, they added.

One newspaper, Al-Sahafah, said the church was part of a complex that included a school and dormitories. Ethiopian refugees living in the Sudanese capital also used the church.

The mostly Christian and animist South Sudan seceded from Sudan in 2011, some six years after a peace deal ended more than two decades of war between the two sides. But tens of thousands of southerners remain in Sudan, a legacy of the civil war that drove hundreds of thousands of them to seek relative safety in the north of what was then a single Sudanese nation.

Vice President Ali Osman Taha, meanwhile, rejected in a television interview suggestions by South Sudan for the deployment of international forces in Heglig, saying the area was internationally recognized as Sudanese territory. He also said that Khartoum would shortly announce the monetary value of what he said was the destruction caused by Southern Sudanese troops in Heglig and that his government would demand compensation.

Sudanese army spokesman Col. Sawarmy Khaled also said that government forces have repulsed an attack by Southern Sudanese forces in the area around the town of Talode in South Kordofan, the same region where Heglig is located. He said the southerners suffered unspecified casualties but did not say when the fighting took place.