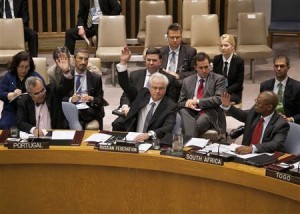 The U.N. Security Council unanimously adopted a resolution on Saturday that authorizes an initial deployment of up to 300 unarmed military observers to Syria for three months to monitor a fragile week-old ceasefire in a 13-month old conflict.

The Russia-European drafted resolution said that deployment of the U.N. observer mission, which will be called UNSMIS, will be “subject to assessment by the Secretary-General (Ban Ki-moon) of relevant developments on the ground, including the cessation of violence.”

The council’s resolution also noted that the cessation of violence by the government and opposition is “clearly incomplete” and warned that the 15-nation body could consider “further steps” in the event of non-compliance with its terms.

Like the council’s resolution from last week that authorized deployment of an advance team of up to 30 monitors, Saturday’s resolution calls on both the Syria government and opposition to halt fighting that has killed thousands over the past year.

The council’s move to condition deployment of UNSMIS on Ban’s assessment of compliance with a truce reflected the fact that the U.S. and European delegations are concerned about the failure of the Syrian government to halt the violence, return troops to barracks and withdraw heavy weapons.

“We now see the main aim as being the unswerving clear respect by all parties of the provisions of the resolution,” he told the council. “Any deviation in terms of interpretation, or deviation from the provisions is unacceptable.”

French Ambassador Gerard Araud said “we’re taking a risk” with the deployment of UNSMIS, adding that the council would have to consider sanctions if Damascus continues the violence.