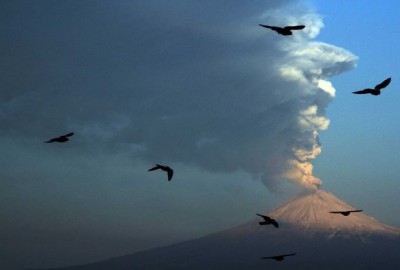 PASO DE CORTES, Mexico — From the oak and pine forest below Popocatepetl’s seething caldron, the volcano’s buzzing growl sounds much like the choppy beating of blades.

“To me it is like a helicopter just starting up,” said Juan Ochoa, who shares a shack on the mountain’s slopes with a lone dog near a gorge that channels spilling lava. “People are frightened of it, but they are foolish. If it’s decided it is your time to die, it is your time.”

The nearly 18,000-foot volcano – Popo for short and known as Don Goyo to Ochoa and other locals – has rumbled to life anew: spitting ash, steam and brimstone, flaring an ominous orange along its night-shaded rim.

Scientists say no serious eruption seems imminent, that the mountain’s fevered breath provides a healthy release of the fury within. But with some 25 million people living within the volcano’s reach, officials are taking no chances. They’ve issued evacuation alerts for the nearly 60,000 people living in the farm towns and villages in the likely path of any lava flow.

“It’s our obligation to be alert, keep our guard up,” President Felipe Calderon said Friday at a conference outlining the precautionary measures being taken by state and federal government. “We suggest that people teach themselves how to get out … that in the remote chance they have to evacuate, they know exactly how to.”

Ochoa, like many others from the communities in harm’s way, takes the warnings with an informed shrug. Don Goyo for them is an ancient and benevolent spirit, the bringer of rain, as alive as any being.

“I have never seen him; perhaps it’s not my fate. But others have. He walks in these forests,” said Ochoa, who has spent his 65 years in the largely indigenous communities on or near the volcano’s eastern slopes. “Many people don’t know that. This mountain has its mysteries, its history.”

Though it has been active for eons, eruptions in recent centuries have often punctuated times of crisis, encouraging Don Goyo’s believers.

Popo convulsed for several years amid Hernan Cortes’ conquest of the Aztecs, which was launched from the ridge connecting Popo with the adjoining Iztaccihuatl mountain and now bears the conquistador’s name.

After seven decades of quiet, the volcano’s current 18-year run of activity began in 1994, a year that saw a Maya Indian uprising, the assassination of a leading presidential candidate and a savage economic meltdown.

Don Goyo, a nickname derived from Gregory, is the post-conquest incarnation of the warrior prince of Aztec legend who transformed into the volcano after dying of a love-struck broken heart. Iztaccihuatl was his betrothed, who herself had died upon hearing false reports that the he had fallen in battle.

The slightly larger Pico de Orizaba volcano rises to the east, the extinct Nevado de Toluca further west. But Popocatepetl, one of more than 400 active cone-shaped mountains along the Pacific Ocean’s Rim of Fire, both inspires and frightens people in the Mexican highlands like no other.

Clouds of ash and gas can solidify and race down the slopes at 90 mph, the report warned. Magma can melt glacier ice, setting off mudslides like those that killed some 25,000 beneath Colombia’s Nevado del Ruiz volcano in 1985.

Mexico City television stations and newspapers have carried stunning images of the smoking mountain since it awakened eight days ago.

“If it comes, it comes directly here,” said Blanca Jimenez, 50, who runs a snack stand on the plaza of Xalitzintla, whose 1,800 people stand in the lava’s path. “We are accustomed to all of this so it doesn’t frighten us so much. But we have to be prepared; there are many old people and children here.”

Several dozen state police officers have been stationed in the town as the alert levels have been raised. Evacuating Xalitzintla will take an hour or more from the moment the Catholic church’s bells sound the alarm. The lava took more than four hours to arrive in 2000.

“Things are looking calmer,” Gregorio Fuentes, the town’s mayor, said Thursday. “But each event it different. So we have to be prepared.”

Photo : Birds fly in the foreground as a plume of ash and steam rise from Popocatepetl volcano as seen from San Andres Cholula, Mexico, on Wednesday April 18, 2012. Mexico’s Popocatepetl volcano is continuing to spout gases and hot rock fragments and it is dusting towns on its flanks with volcanic ash. Photo: Associated Press / AP