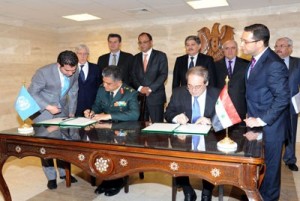 The United Nations has reached a deal with Syria outlining the rules for the deployment of observers to monitor the country’s ceasefire, both sides said.

A spokesman for UN-Arab League envoy Kofi Annan said the agreement covered the functions of the mission and the Syrian government’s responsibilities.

A fragile truce is in place in Syria, but reports of violence have continued.

Earlier, the UN’s chief Ban Ki-moon said he wanted to increase the number of monitors to 300.

In a letter to the UN, the secretary-general said Syria had not complied with the terms of the peace deal, but that there remained an “opportunity for progress”.

Members of the Security Council are meeting in New York to discuss the report.

In a statement, the Syrian foreign ministry said an accord on observers was signed by Deputy Foreign Minister Faisal al-Mekdad and a member of the advance team, which arrived in the country earlier this week.

“This agreement comes within the framework of Syrian efforts aimed at making the Annan plan succeed and to facilitate the UN observer mission while respecting Syria’s sovereignty,” the statement said.

The office of Mr Annan confirmed an agreement had been signed, and said it was also having discussions with representatives of Syrian opposition groups.

“This agreement outlines the functions of the observers as they fulfil their mandate in Syria and the tasks and responsibilities of the Syrian government in this regard,” Ahmad Fawzi said in a statement.

“The hard part lies ahead,” the statement said, in order to reach what it called “a truly Syrian-led and -owned political dialogue to address the legitimate concerns and aspirations of the Syrian people.”

He says that it is not yet clear exactly how much freedom of movement and access the monitors will be given.

He says that so far, they haven’t been allowed to go to the most obvious trouble-spot, Homs – where intense shelling of rebel-held areas has continued.

In his report to the UN, Mr Ban expressed concern over continuing violence and said it was critical that the government kept its pledge to withdraw troops from populated areas.

The secretary-general noted that while violence had fallen at the time of the truce on 12 April, it had escalated again in recent days.

He also noted that there had been “no significant release of detainees”, and “no substantive progress” in negotiations on humanitarian access, in reference to other aspects of Mr Annan’s six-point plan.

Meanwhile, US Secretary of State Hillary Clinton is due to meet foreign ministers in Paris later to discuss the crisis.