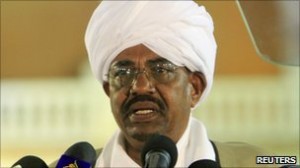 The move comes after Sudan’s parliament passed a resolution branding South Sudan’s ruling party an enemy that “must be fought until it is defeated.”

Sudan and South Sudan are embroiled in the worst clashes along their poorly defined border since the secession of the South last summer. The United Nations Security Council is considering sanctions on both countries in an attempt to end the violence, and demanded South Sudanese forces withdraw from their occupation of the 60,000-barrels-a-day oil field Heglig oil field. Both countries continue to ignore calls to end the fighting.

On a visit Thursday to the oil-rich, restive border state of South Kordofan, Bashir rallied his troops, which are now engaged on three fronts with South Sudan.

“Heglig isn’t the end, it is the beginning, and we shall go all the way to [South Sudanese capital] Juba,” Bashir told a rally.

“If they didn’t defeat us when we were a green army, how will they defeat us now,” he said. 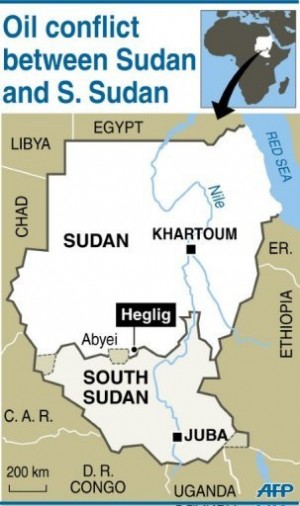 Sudan and South Sudan have been at odds for 20 years, a time that included two civil wars believed to have claimed the lives of more than two million people. The South’s secession left several issues unresolved, including how to share oil revenue and production between the reserve-rich South and the north, center of refineries, ports and other infrastructure.

Troops also engaged around Bahr el Ghazal and South Sudan captured a base used by Sudan to train militias. These claims couldn’t be verified independently. Both countries accuse each other of sponsoring proxy rebels in the others territory.

Bashir accuses the South of implementing the agenda of foreign countries which backed its secession bid, at the expense of its own people.

Many say that the war rhetoric has been escalated by the loss of oil revenues, the lifeline of both Sudan and South Sudan.

The capture of Heglig and the subsequent halt of oil production there has halved Sudan’s oil output to 55,000 barrels a day, while a separate dispute over transit fees has seen South Sudan shut in its entire 350,000 barrels a day of production since January.

South Sudan has called for talks to end the current dispute, with Information Minister Barnaba Benjamin saying that its people would never look at Sudan as its enemy due to their “long history and long common border.”

Many say hard-liners with a history of taking rigid negotiating positions seem to be running the show in both Sudan and South Sudan, a situation that may stymie attempts for a peaceful settlement of post secession disputes.