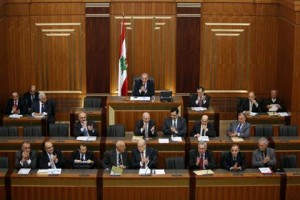 In the second day of the Parliament’s session rival parliamentarians took turns Wednesday in attacking each other’s coalitions. The attacks centered on the record of current and previous governments, corruption, events in Syria and Prime Minister Najib Mikati’s policy of disassociating the country from the uprising in Syria

Change and Reform bloc MP Ziad Aswad was one of the first MPs to to speak. He attacked the opposition and criticized its support for the Arab Spring uprisings.

“This group of politicians has led to the destruction of Lebanon and its institutions,” Aswad said , adding : “Your shaky ‘Spring’ does not attract us… nor does it scare us.”

The MP expressed the view that his own parliamentary bloc was “targeted” due to its stances. He defended Maronite patriarch Bechara al Rai for supporting Syrian president Bashar al Assad by saying ” he is doing so for the sake of preserving the Christian community”

Amal Movement MP Ghazi Zeaiter slammed the opposition for supporting the uprising in Syria and said that Syria, under the presidency of Bashar al-Assad, was and will always be Lebanon’s brotherly country.

“Assad’s Syria will always be Lebanon’s brotherly [country] and the heart of the Arab nation,” Zeaiter said

“How is [Lebanon] allowed to attack a country which is considered to be its older brother?”

The MP also called on the cabinet to abide by the agreements signed between Lebanon and Syria “without hesitation.”

“The ministers have [no shame] in violating the law and striking [side] deals. They shamelessly lecture about reform and fighting corruption,” Jarrah said in the parliamentary plenary session, in reference to the electricity( commission on power generating ships ) and diesel ( windfall profits at the expense of the public ) scandals .

“With this government, there is no security [on all levels],” Marouni said during the parliamentary plenary sessions.

Mikati yesterday defended his policy of dissociating Lebanon from the events in Syria.

“The government had certain priorities, the main one being stability as pertains to three factors, stability in the south … financing the Special Tribunal for Lebanon … and events in the region, particularly in Syria,” Mikati said

Marouni also said that the cabinet has not achieved anything.

“We ask about the uncontrolled border in Bekaa and the North. Today, this cabinet is incapable of defending the country and it is not [working] toward supplying weapons to the army because it has to keep justifying the present illegitimate arms,” he said, in reference to Hezbollah’s arms.

“We ask about [telecom] data and blocking the security forces’ [access] to them. Will [the cabinet] assume responsibility for any crime that happens?” he asked.

Following the assassination attempt against Lebanese Forces leader Samir Geagea on April 4, March 14 figures have slammed Senhnaoui for allegedly not transferring telecom data, and have said that such an action is hindering the investigation into the incident.

Change and Reform bloc MP Abbas Hashem slammed the opposition and said there was a “collapse of morality.”

“Who is accusing whom? There is a collapse of morality. Does a party known for over 18 years of corruption have the right to falsify history and [accuse] the victims of committing what [the party has] done?” Hashem asked in reference to March 14’s criticism of Prime Minister Najib Mikati’s cabinet.

He also said that the opposition was “opposing the [Lebanese] citizens more than it was opposing the cabinet.”

“We did not hear the so-called opposition’s alternative studies [on current issues]… but [we heard] analyses for the situation in Syria.”

Hashem added that the opposition rejected developmental projects “based on the [slogan] that they do not want anyone other than them to rule, hence [people] would say that the Free Patriotic Movement ministers were not productive.”

“I call on you [Mikati] to dismiss this cabinet and form a technocratic cabinet , since the [current one] has lost the people’s trust,” Hout said

He also addressed the electricity scandal by saying the matter called for establishing a regulatory committee.

Hout also addressed the release of former brigadier-general and Free Patriotic Movement official Fayez Karam saying: “It seems that collaboration in our country is a perspective.”

“We will submit a draft law to exclude those sentenced for collaboration from [benefiting from the legislation that reduces the prison year from 12 months to nine months],” he added.

Karam—who was arrested in August 2010 and sentenced to two years in prison for leaking information to Israel—was released from prison earlier in April. He was released before the term of his sentence expired thanks to a change in Lebanese legislation that now reduces the prison year from 12 months to nine months.

He also slammed those criticizing the Resistance’s ( Hezbollah’s )arms and said these arms “guaranteed” the Resistance, army and people formula.

Fadlallah also addressed the issue of controlling the border with Syria saying it was a US request.

“I will only [refer] to Prophet Mohammad’s [statement] when he said: [There will be] years when the liar is believed and the honest is disbelieved, [when] the traitor is entrusted and the faithful is [called a] traitor and when a silly man speaks in the affairs of the public,” Siniora said

Change and Reform bloc MP Farid al-Khazen also defended the cabinet and attacked the opposition . He said if the opposition had been in power, it would have involved Lebanon in a regional fight.

“We thank God, the opposition [March 14] is not in power,” Khazen said