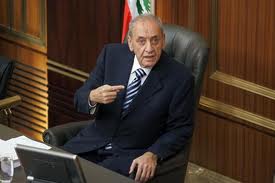 March 14 opposition MPs launched a strong attack on Prime minister Najib Mikati and his cabinet on Tuesday, the first day of the Parliament session which ends on Thursday and intended to discuss the performance of the government .

Speaker Nabih Berri gave the floor first to Mikati who acknowledged certain shortcomings while defending his government as providing Lebanon with stability. He defended his policy of dissociating Lebanon from the events in Syria.

“The government had certain priorities, the main one being stability as pertains to three factors, stability in the south … financing the Special Tribunal for Lebanon … and events in the region, particularly in Syria,” Mikati said

Deputy Parliament Speaker Farid Makari who was the first member of the opposition to address the session, launched a scathing attack on Mikati, accusing him of encouraging “terrorism.”

He said the cabinet was made up by a “forged majority” that was “born in the dark and forced us to live in the dark.”

Makari also described the government as “decomposing over its growing differences,” saying Mikati should resign before losing more credibility.

He also addressed the cabinet’s decision “to dissociate” Lebanon from Syrian developments and said “this position is [tantamount] to participating in the crime and conspiring with the criminal.”

“It is a scandal to dissociate oneself from confronting the security movements carried out by the Syrian regime and its supporters inside Lebanon.”

Lebanese Forces MP Antoine Zahra continued with the criticism that the deputy speaker had started, saying the cabinet has taken the country back to the era of “tutelage”.

“Nobody trusts you anymore,” he told the ministers who flanked the premier at the session.

“Go back to your consciences,” he said as he urged “the de facto forces” to provide his personal protection so that he could take part in the 2013 elections.

He also slammed the government for involvement in the red diesel scandal, for severe power cuts and bad mobile phone services.

“This cabinet is insulting the parliament’s role, and we cannot hold it accountable because it was imposed on us ”

MP Robert Ghanem, called for a serious dialogue to protect the country and the Lebanese people.

“Unfortunately we have not learnt from [previous] mistakes. It is time for [Lebanon’s] cabinet to be one and not cabinets within a cabinet,” Ghanem added in reference to the internal disputes within the government.

“The parliament is the appropriate place to launch a serious dialogue to lead to a reconciliation among the Lebanese people and strengthen Lebanon [amid] regional challenges.” He added

“For them, Syrian President [Bashar al-Assad] is always right, the Syrian people is always wrong and the United Nations is always biased.” An implicit reference to Hezbollah

Hamadeh also addressed the Lebanese citizens, saying: “Do not believe that Assad’s regime has a shred of hope of staying [in power].”

Hamaded said the government policy of distancing itself from Syria was “backing the killers.”

MP Robert Fadel said that Prime Minister Najib Mikati’s cabinet and the majority are responsible for protecting all political figures.

“Political assassinations must become a red line,” Fadel said in reference to the attempted assassination of Lebanese Forces leader Samir Geagea outside his Maarab residence in the district of Kesrouan.

Change and Reform bloc MP Simon Abi Ramia defended the budget as presented by the cabinet and said that his group will not “allow anyone, neither today nor tomorrow, to blackmail [us]” on the issue of government expenditures. A possible reference to the March 14 demand that calls for linking of the approval of the expenditures of the present cabinet to the approval of the expenses of the previous cabinets.

MP Assem Aaraji was the first to address the plenary session after the lunch break. He said the performance of Mikati’s cabinet was the worst in Lebanon’s history

“Lebanon has not witnessed a performance worse than the current cabinet’s,” Aaraji said

He accused the cabinet of corruption and of striking side deals and called on it to find solutions for the country’s current crises.

MP Ghazi Youssef said: “The cabinet was born dead… and it does not need an opposition [confronting it] because it opposes itself.”

“The cabinet has harmed itself more than the opposition did.” He said

He also slammed Telecommunications Minister Nicolas Senhnaoui for not improving the telecom sector and Energy Minister Gebran Bassil for “seeking to control the spending of more than $2 billion through suspicious tenders without referring to the cabinet.”

He issued a warning to the opposition, namely the March 14 coalition.

“If this parliament is unable to bring those people to account, then the [Lebanese citizens] will do [so later].”

Hezbollah MP Nawwar Sahili praised the government and its policy regarding the events in Syria.

“[I commend] the performance of the government, which is [being attacked] for [its stance on] the Syrian crisis and which dissociated itself in order to prevent the crisis from reaching Lebanon.,”

The MP, however, added that the government was against dissociation when it comes to “dragging Syria into civil war.”

Lebanese Forces bloc MP Joseph Maalouf criticized the government’s response to the Syrian violations along the border with Lebanon.

“The violations of the Lebanese territory by the Syrian regime are repeatedly taking place, and what was the response of the government? [It] dissociates itself even from the killing of its [own] citizens on their land and in their homes,” Maalouf said

Maalouf also condemned the assassination attempt against the Lebanese Forces leader Samir Geagea and warned against “underestimating” the importance of the event.

The LF MP concluded by calling on the government “to resign.”

Lebanon’s political scene is split between supporters of Syrian President Bashar al-Assad’s regime, led by Hezbollah and its March 8 allies, and March 14 which supports the Syrian people in their demands for freedom and democracy .

The current cabinet is dominated by Hezbollah