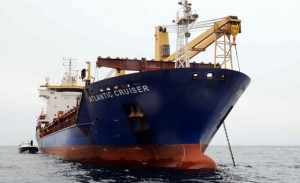 Turkish authorities are preparing to board and search a German-owned cargo ship reported to be carrying Iranian weapons bound for Syria.

Citing unnamed dissident sources within the Syrian government, the German magazine Der Spiegel first reported last week that the Atlantic Cruiser was carrying Iranian arms, which were loaded at a port in Djibouti, to Syria. The magazine said the cargo ship had been chartered by a Ukrainian company.

The report put pressure on the German government, which, as part of the European Union, is obliged to enforce an EU arms embargo against Syria.

“The German government is aware of the ship Atlantic Cruiser. For further information, please find the press release of the ship-owning company,” said a spokesman for Germany’s Ministry of Economy, in an e-mail responding to an inquiry from CNN.

“According to the documents at the disposal of the ship owners, the cargo destined for Syria is composed of parts of a thermal plant (“Tishreen Thermal Power Station Extension Project”), which were shipped by an Indian power plant manufacturer to the Syrian Ministry of Electricity,” Bockstiegel announced on its website.

Despite the ship-owner’s denials, the foreign minister of Cyprus announced last weekend that if the Atlantic Cruiser requested to dock at a Cypriot port, it would be denied access.

The recent actions of the ship’s crew have added to suspicions about the vessel and its cargo. For hours at a time as it sailed off the Syrian coast, the ship’s Automatic Identification System (AIS) was turned off. When the ship reappeared on real-time maritime maps, it appeared to be sailing in circles in waters between the island of Cyprus and Syria’s Mediterranean coast.

Bockstiegel wrote that the ship’s crew disabled its tracking device “apparently for its own protection.”

“On Friday 13, 2012, the ship owner received an e-mail with the allegation that the vessel would have on board arms and heavy weapons destined for Syria,” Bockstiegel announced on its press release. “The ship owner was requested not to call at Syrian ports; otherwise, the vessel would be attacked and sunk.”

Bockstiegel said the sender of the e-mail identified itself as the “Syrian Revolution Naval Forces.”

After sailing in circles for days, the Atlantic Cruiser arrived at the Turkish port of Iskenderun Tuesday night.

Turkey is also enforcing an arms embargo on Syria, which has seen more of a year of upheaval after President Bashar Al-Assad’s government began cracking down on protesters calling for reform. Turkish authorities have intercepted several weapons shipments from Iran to Syria over the last year.

Iran is a longtime Syrian ally and economic partner.

The spokesman for the Turkish foreign ministry said port authorities were likely to search the vessel Wednesday afternoon.

“This is something you can’t risk,” Selcuk Unal told CNN. “There were press reports, that is why we can’t risk it.”

Last January, another cargo ship named the Chariot attracted international attention after Cypriot and Turkish officials announced that it carried 60 tons of dangerous material Turkey later described as ammunition to the Syrian port of Latakiya.

On Monday, European Parliament member Marietje Schaake lodged a formal request for information on the allegations swirling around the Atlantic Cruiser to the European Commission’s foreign policy chief.

Schaake told CNN she had issued two similar previous requests concerning the Chariot. She said European officials have still not answered questions about why Cyprus, which is also party to the European arms embargo against Syria, allowed the Chariot to sail from the Cypriot port of Limassol when it was known to carry tons of dangerous material destined for Syria.