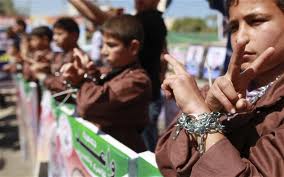 More than 1,200 Palestinian prisoners held in Israeli jails began a hunger strike on Tuesday to protest what they say is the harsh and degrading treatment received by Palestinian detainees in Israel.

The strike already has the support of more than one in four Palestinian prisoners, and activists said they expected the protest to spread further still.

Qaddura Fares, the head of the Palestinian Prisoners’ Club, said that a large number of detainees had given the Israeli authorities until the end of the month to meet their demands. “If not, all the prisoners will take part in the food strike,” he said.

Israeli officials said the strike was the largest of its kind since 2004, but warned that the government would not be pressed into concessions.

“We have had similar occurrences in the past and we know how to deal with this sort of situation,” said a government spokesman. He said all prisoners in Israel were held “in accordance with international conventions and laws”.

While the list of grievances is specific to the prison population, the protest is certain to resonate with the broader Palestinian public. Prisoners have always formed an integral part of the Palestinian national movement and often act as pace-setters for political initiatives. The overwhelming majority of Palestinians view their detainees in Israel as political prisoners, not criminals, and their fate is followed closely in Gaza and the West Bank. What is more, almost all Palestinian families have members who at some point served time in an Israeli jail.

In the current stand-off, the protesters want prison practices they deem harsh and degrading stopped, such as prolonged solitary confinement and intrusive night searches of prisoners and their cells. They also want the government to re-instate their right to study for high-school exams and university degrees – which was revoked last year.

Administrative detention was also at the heart of an earlier high-profile hunger strike started by a Palestinian prisoner in December. Khader Adnan refused food for 66 days before the Israeli authorities agreed not to prolong his detention. He was finally released on Tuesday. His case inspired followers, including a female prisoner who was released in the Gaza Strip after refusing food for 43 days. Another four Palestinian detainees are currently in prison hospital after prolonged hunger strikes.

According to Mr Fares, the strikers are confident they can win the struggle: “In the past, 90 per cent of these strikes were successful. All the rights we have achieved [for Palestinian prisoners] so far were achieved as a result of hunger strikes – not because of the Israeli government.”