It is for real… a Lebanese was found in a suitcase 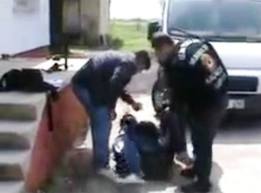 We’ve all joked about climbing into somebody’s suitcase for them to take us on holiday with them.

But one desperate man appears to have taken the idea a step too far.

The 20-year-old Lebanese traveler was found hiding in the jumbo-sized luggage of his companion at the Pazarkule border crossing between Turkey and Greece.

Officials became suspicious when they saw the 22-year-old German traveler – who arrived on foot – dragging the enormous suitcase.

It appeared to be much heavier than those being carried by other holidaymakers.

Officials soon became certain that there was something more than towels and suncream loaded into the black canvas bag.

Turkish customs officers ordered the German man, who has not yet been identified, to stop in the car park.

They then unzipped his luggage to find the Lebanese youth curled up inside the fetal position, clearly hoping that he had made it across the border.

The man even had a pillow and blanket stashed inside the luggage to make it as comfortable journey as possible. There was also a small supply of snacks tucked inside the suitcase.

But after being caught trying to illegally cross the border he was taken to the police station and will be deported.

The German man was arrested taken into custody for questioning. 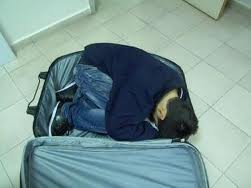 Stunned onlookers watched as the drama unfolded, with one person recording the drama on their mobile phone.

The footage has now been uploaded to the internet where it has attracted thousands of comments from viewers.

One user joked: ‘I would argue the guy was a luggage stowaway and then ask may I leave. And do it with a serious face. It might work. ‘

Another added: ‘I thought for a sec they were going to repack the suit case and let him go.’

While one said they would never consider such a manoeuvrings because of ‘claustrophobia’.