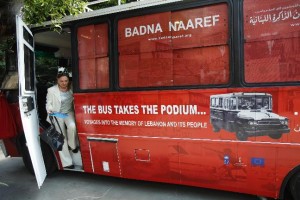 A white and red ‘bus for peace‘ began touring Lebanon Friday, to mark the 37th anniversary of the Lebanese civil war and promote awareness against bloodshed in the country.

“The aim of this bus is good, because it promotes awareness among the Lebanese so this war will never re-occur in Lebanon,” Beirut resident Hana Hadad told dpa.

Lebanese Christian and Muslim militias began fighting fierce battles across the country in 1975. A fifth of the country‘s population was lost during the conflict, which also turned the capital into ruins.

The war ended in 1990, after a Saudi-brokered deal established national reconciliation among the rival factions in the country.

THe bus was donated by the United Nations Development Programme, to carry archives and film documenting the civil war.

“By making people read and watch films about the conflict that gripped Lebanon for years and show them the sufferings, we can enhance awareness,” said Joanna Nassar, who is in charge of the UNDP project.

The ‘bus for peace‘ will travel across Lebanon in the coming days.

Prime Minister Najib Mikati stressed on Friday that the Lebanese must still learn from the country‘s civil war and resort to serious dialogue in order to avert dangers.

“Only honest and open cooperation between all components of Lebanese society guarantees real and complete national partnership, bolsters the state, and fortifies Lebanon against dangers,” Mikati said in a statement marking 37 years since the start of the war.

“Lebanon must be protected from the painful regional events, the repercussions of which we have long warned about,” he added.