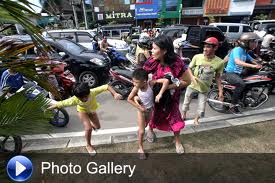 Two massive earthquakes triggered back-to-back tsunami warnings for Indonesia on Wednesday, sending panicked residents fleeing to high ground in cars and on the backs of motorcycles. No deadly waves or serious damage resulted, and a watch for much of the Indian Ocean was lifted after a few hours.

Women and children cried in Aceh, where memories are still raw of a 2004 tsunami that killed 170,000 people in the province alone. Others screamed “God is great” as they poured from their homes or searched frantically for separated family members.

Patients were wheeled out of hospitals, some still lying in their beds with drips attached to their arms. And at least one hotel guest was slightly injured when he jumped out of his window.

An alert that followed from the Pacific Tsunami Warning Center in Hawaii advised countries all along the rim of the Indian Ocean, from Australia and India to as far off as Africa, that a seismically charged wave could head their way.

Two deadly tsunamis in the last decade — the most recent off Japan just one year ago — have left the world much better prepared.

The only wave to hit, though, was less than 30 inches (80 centimeters) high, rolling to Indonesia’s emptied coastline.

Just as the region was sighing relief, an 8.2-magnitude aftershock followed.

He told his countrymen to stay clear of western coasts.

Residents in Aceh could hardly believe it.

“What did we do to deserve this?” cried Aisyah Husaini, 47, who lost both her parents and a son in the 2004 tsunami. “What sins have we committed?”

“I’m so scared, I don’t want to lose my family again,” she said, clinging to her two children in a mosque in Banda Aceh, where hundreds of people sheltered.

Again, though, the threat quickly passed. 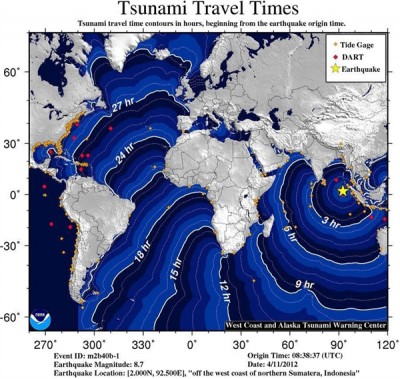 Experts said Wednesday’s quakes did not have the potential to create massive tsunamis because the friction and shaking occurred horizontally, not vertically. The earth’s tectonic plates slid against each other, creating more of a vibration in the water.

In contrast, mega-thrust quakes cause the seabed to rise or drop vertically, displacing massive amounts of water and sending towering waves racing across the ocean at jetliner speeds.

“But as soon as I discovered what type of earthquake it was … I felt a lot better.”

The tremors were felt in neighboring Malaysia, where high-rise buildings shook, and Thailand, India and Bangladesh.

Those countries, Sri Lanka and the Maldives evacuated buildings and beaches and readied relief efforts in case of disaster.

The World Meteorological Organization said communication systems set up after the 2004 tsunami appeared to have worked well.

“Our records indicate that all the national meteorological services in the countries at risk by this tsunami have received the warnings in under five minutes,” said Maryam Golnaraghi, the head of WMO’s disaster risk reduction program.

The alert was sent out by U.S. National Weather Service, which operates a tsunami warning station in Hawaii, she said.

Indonesia straddles a series of fault lines that makes the vast island nation prone to volcanic and seismic activity.