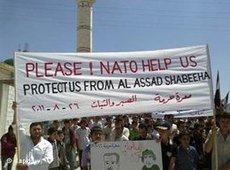 By late March, the Free Syrian Army in this restive city was bracing for trouble.

Although the rebels had controlled Saraqeb for months, government troops had just finished their conquest of surrounding cities, including the provincial capital, Idlib.

Saraqeb would no doubt be next, attacked by forces far better equipped than the rebels. The night before, rebel commanders had heard the tanks were coming on the military radio channel they monitored.

On the crisp, sunny morning of March 24, they saw the ominous sign of a full-blown government assault. A column of T-72 tanks rolled into the city center, emerging and disappearing between the city’s street blocks.

It was typical of the strategy Syrian forces had deployed to reclaim rebel strongholds throughout the country. From Hama to Homs and beyond, the tanks rolled in, shelling rebel positions before launching a broader attack. Once they controlled the city, activists said, regime militias would go door-to-door, arresting or executing anyone suspected of aiding the rebels.

It is this kind of assault that Syrian President Bashar al-Assad has promised to halt as part of cease-fire negotiated by the United Nations and Arab League.

On the day that Assad had agreed to withdraw his tanks and troops, GlobalPost correspondent James Foley reveals how a violent government strategy has at least partially succeeded in reclaiming control Saraqeb.

When the tanks first arrived here in Saraqeb, a city of about 40,000, the rebels knew they were in trouble.

All that stood between them and a dozen or so 60-ton tanks was a smattering of AK-47s and a few RPGs. On street corners, the often-inexperienced rebels psyched themselves up for the impossible.

“Boom,” the first tank shell drove into the side of a multi-story building, clouding the air with plaster and dust and spraying fist-sized pieces of shrapnel into the street.

The fighters responded with shouts of “Allah Akbar!” as if it was their victory. It wasn’t. Soon one of their wounded volunteers was dragged off with an arterial bleed from his thigh. He would likely bleed to death.

One young fighter, a sweatband around his head, darted into the line of fire. Balancing an antiquated RPG launcher on his shoulder, he fired a rocket. But it wasn’t able to even puncture the tank’s frontal armor. In desperation, other fighters rolled out propane tank bombs.

But it was all in vain.

With their distinctive engines humming above the screams and gunshots, the tanks continued to crawl through the streets.

Sniper shots cracked over the heads of rebels who dared venture into the open. Eventually, the Free Syrian Army fighters who hadn’t already fled found themselves boxed into the central market.

“I want to show the world how [Assad] is a strong criminal,” said one 60-year-old mother. She said the Shabiha killed three of her sons. “I want to take the Kalshnikov. Bring me a Kalashnikov and I will go fight them. I will kill Assad’s men.”

“We have only God,” one fighter said.

Teens on opposite street corners peered at the approaching tank, some filming it with their cell phones. Syrian Army machine-gun bursts ran up the white tower of the central mosque. One fighter from a small village on the outskirts of the city attempted to fire his RPG. But it flamed out the wrong end like a defective Roman candle.

Maher Al Sufi, a well-known rebel fighter who had taken on tanks before, was not so lucky this time. He lingered in view of the T-72 for too long, or maybe at the wrong moment.

After the explosion and the cloud of white dust cleared, his rebel friends dragged his headless body around a corner, leaving a thick trail of blood. It appeared he’d taken a direct tank shell to the head.

“La illaha illa Allah,” cried his comrades, who then called his name as his body was taken away in the back of an open car trunk.

By late afternoon the fighters were in full retreat. The Al-Nour brigade, which claims to have more than 300 men, evacuated the school they had used as their base for months.

Remaining rebel fighters huddled together as darkness fell. Abdullah, a commander, sped his Toyota pickup through a maze of alleys, stopping to yell at his young volunteers for failing to signal as the tanks drove over a bridge he’d packed with explosives.

Although all could hear the heavy tank engines in the darkness, the opportunity, if there was one, had passed. Abdullah emptied his 9mm pistol clip into the night in frustration.

All of a sudden the cracks of an AK-47 rang down from the night sky. The fighters, confused, scattered back into alleys for cover.

The rebels frantically packed their blankets, water pipes and guns into trucks. Collecting as many families as they could, they sped into the night. They regrouped in the surrounding farms and small villages, plotting a return at the crack of dawn.

By early morning a ragtag group calling themselves the Al Farouk Katiba had gathered in an olive grove on the outskirts of the city. The fighters could hear the Syrian Army pressing forward with a full-scale attack in the distance.

In the field an old man hammered a screwdriver into the head of an antiquated RPG rocket in attempt to fix it. Young men watched, smoking.

The Al Farouk commander said 30 more tanks had come from the west that morning. The Syrian army had effectively locked the city down.

But two tanks were positioned along the highway, guarding a footbridge into the city. Spotting the rebels, the tanks started shelling in their direction. Explosions landed in the field beyond.

Before long, another mass retreat had begun. The group fled back through the houses and into the fields. Cars sped over hills and flat beds packed with youth followed through the hamlets, passing the faces of other men who’d also lost their cities. The shelling continued in the distance.

It took less than two days for the Syrian regime to regain control of Saraqeb, just as it had the city of Idlib a few weeks before.

While the Syrian regime now controlled Saraqeb by military force, the Syrian government appeared to turn its attention to the families who live here and who it suspects are quietly loyal to the opposition.

So as the final phase of its strategy, it sent the Shabiha.

The Shabiha, a devoutly pro-regime militia, has operated in the shadows for decades. They control smuggling routes, and have earned a reputation for being above the law. Their name comes from the Arabic word for “ghosts,” and is now associated with regime torture and murder. There is little average Syrians seem to fear more.

“If they can’t find the son, they’ll take the father and hold him until the son comes,” said Nouri, a Syrian activist based in Belgium. “The Shabiha want to take revenge. The army is not driven in this way. They’re just doing their job.”

Residents all over Idlib Province say they won’t leave their immediate surroundings for fear of crossing an army checkpoint and finding out that their names had landed on one of these lists.

Even inside rebel strongholds like Saraqeb, Syrian intelligence forces were able to get names of protesters, fighters and those who associate with them, Nouri said.

Sermin, the small town of 15,000, shows what happens after Syrian security forces conquer a rebel stronghold. Sermin was shelled several days before Saraqeb. Its mosque was nearly destroyed. Some houses burned. And some of its residents executed by the Shabiha, leaving a town seething with anger.

“I want to show the world how [Assad] is a strong criminal,” said one 60-year-old mother. She said the Shabiha killed three of her sons. “I want to take the Kalshnikov. Bring me a Kalashnikov and I will go fight them. I will kill Assad’s men.”

Idlib Province is predominantly Sunni, a branch of Islam to which most Syrians belong. Assad and most government officials are Allawite, a smaller Islamic sect that is the minority here.

Wherever one goes in Idlib Province, the Sunni villagers are anxious to talk about how Assad is killing his own people. And they remind the few foreign correspondents traveling through this area that the opposition needs weapons to defend themselves.

“We need weapons if from the sky,” said Malik, 42, an unemployed taxi driver from Bennish. “I have seven children. I’m willing to give my children to get weapons to kill Assad.”

Idlib has fallen. And, now, so has Saraqeb. But the countryside is awash in revolutionaries who say they are planning more attacks as soon as they can collect enough ammunition — cease-fire or not.