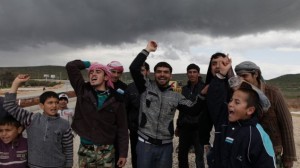 Turkish officials said on Monday that Syrian government forces had opened fire across the Turkish border late on Sunday and wounded three people close to one of the largest refugee camps housing Syrian nationals.

The firing deepened the gloom surrounding prospects for a cease-fire set to be initiated on Tuesday under a peace proposal by Kofi Annan, the special envoy on Syria for the Arab League and the United Nations. The proposal called for government forces to pull back from major population centers so that a truce can begin 48 hours later.

On Sunday, however, Syria demanded written guarantees from rebel forces that they would lay down their arms before government forces withdrew. In response, the Free Syrian Army insurgents said that President Bashar al-Assad would not implement the Annan plan and that it would fail.

Opposition activists said on Sunday dozens of people were killed and wounded when government troops shelled a rebel redoubt near the border with Turkey, adding to the 9,000 people already estimated to have died since the uprising against Mr. Assad began more than a year ago.

Turkish officials said it was unclear what kind of weapons caused the injuries on Sunday around six miles inside Turkish territory, near the town of Kilis. The Turkish Foreign Ministry had ordered a Syrian diplomat in Ankara to provide information, the officials said, and there were conflicting accounts about the incident.

A member of the Free Syrian Army insurgents opposed to Mr. Assad’s rule said three Syrians were shot by government snipers as they were about to cross into Turkey, fleeing clashes in a settlement on the Syrian side of the border, the semiofficial Anatolian News Agency reported.

Hundreds of refugees have crossed into Turkey in recent weeks, bringing the number of Syrian refugees in Turkey to more than 24,300, according to the Prime Minister’s office in Ankara. Turkey has built several camps in its southern provinces along the 550-mile border with Syria.

Mr. Annan is expected to arrive in Hatay Province on Tuesday and visit some of those camps, news outlets reported.

As the deadline for a cessation of hostilities approached, China on Monday urged both sides to abide by the Annan proposals, Reuters reported. China, along with Russia, has blocked Western and Arab demands at the United Nations for a tougher stance to force Mr. Assad from office as part of a transition to democratic rule.

“China urges the Syrian government and opposition groups to seize the current critical moment to abide by cease-fire and troop withdrawal promises, cooperate with Special Envoy Annan’s mediation efforts to alleviate the current tense situation and facilitate humanitarian assistance, and promote a political solution to the conflict in Syria,” a Chinese Foreign Ministry spokesman, Liu Weimin, was quoted as telling a news briefing.

“In a desperate attempt to crush the uprising, Syrian forces have executed people in cold blood, civilians and opposition fighters alike. They are doing it in broad daylight and in front of witnesses, evidently not concerned about any accountability for their crimes.”

The developments came as Human Rights Watch said that Syrian security forces had summarily executed more than 100 people, and possibly many more, including civilians and wounded or captured opposition fighters, during recent attacks.

A report documented what it called more than a dozen episodes involving at least 101 victims since the end of last year, many of them in March, accusing government and pro-government forces of executing civilians who posed no threat along with rebels who had been captured or stopped fighting.

Ole Solvang, an emergencies researcher at Human Rights Watch, said: “In a desperate attempt to crush the uprising, Syrian forces have executed people in cold blood, civilians and opposition fighters alike. They are doing it in broad daylight and in front of witnesses, evidently not concerned about any accountability for their crimes.”

There was no immediate response to the report from the Syrian government.

Photo: Newly arrived Syrian refugees, who fled the violence in their country, demonstrate at the border in Reyhanli, Turkey. (photo credit: AP)