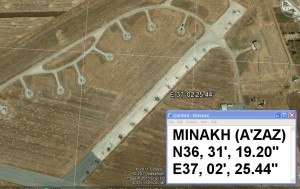 Sources of “the Syrian army free” leadership revealed that its elements in rural Aleppo carried out on Friday night – Saturday an advanced military operation in the Minakh military airport, north of the country, “in response to the storming by the Syrian army the northern city of Aleppo and committing crimes against the residents.”

The sources also told Al Sharq al Awsat that the operation targeted several helicopters that were parked at the airport and killed more than 10 soldiers.” The operation also resulted in the defection of a number of Syrian army elements.