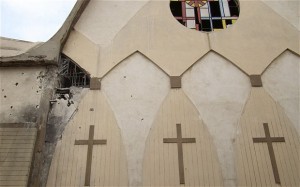 For the first time in centuries no services were held to mark the festival of Easter in Christian churches of war-torn Homs as the Syria government inflicted a heavy bombardment in defiance of UN-brokered ceasefire talks.

Plans for a negotiated end to fighting appeared on the verge collapse yesterday amid widespread violence and a new unilateral demand from the government for “written guarantees” from its opponents to lay down weapons.

The three principal churches for Christian denominations in the city, which until a few months ago was home to Syria’s third largest Christian community, were virtually abandoned. Other small churches have been destroyed as private homes became the places of worship on Sunday with priests and locals gathering in secret.

All are located in districts have been left devastated by weeks of heavy shelling.

“There is no celebration. For one week, there have been no sounds coming from the churches or the mosques,” said Saleem, a resident speaking from his home in Homs Old City, where most of the churches are located.

“Government forces have shelled the area this morning. It is too dangerous to go outside”.

Homs at Easter used to be a tapestry of colourful parades, said Dima Moussa, a member of the Syrian National Council who recalled years of festive visits to her family in Homs as a young woman.

“You could feel Easter across the whole city. Everybody would put on their best clothes, a the children would parade around their church playing instruments,” said Dima. “We painted boiled eggs and brought them to Church to be blessed.”

“It is a family occasion. Everyone would visit their relatives, bringing with them colourful eggs and chocolate for the children. My grandparents would put on huge meals, often a whole sheep, for the whole family”.

“The regime doesn’t care anymore, they are targeting all neighbourhoods, and mosques and churches.”

Two weeks ago Moussa’s relatives fled from Homs as government forces began shelling the Christian neighbourhoods of Hamidiyah and Boustan al-Diwan where they lived. Videos of the area show streets riddled with debris, and concrete buildings shattered by shells and bullet holes.

“The windows of my grandfather’s home were shattered by shelling,” said Moussa. “The regime doesn’t care anymore, they are targeting all neighbourhoods, and mosques and churches.”

“It is too dangerous to go to Church, as the regime is even shelling these,” said Saif al Arab, an activist in Homs who claimed to be in contact with Christians in his neighbourhood. “There is not enough food for them to celebrate in the traditional way. This is not a celebration, they gathered to pray for the people who have been killed in the bombardments”.

At the Vatican, Pope Benedict XVI implored Damascus to heed international demands to end the bloodshed. He said: “Particularly in Syria, may there be an end to bloodshed and an immediate commitment to the path of respect, dialogue and reconciliation, as called for by the international community.”