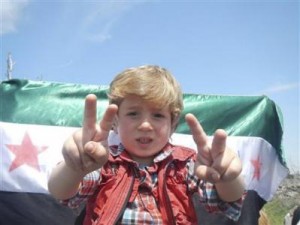 Syrian troops pounded opposition areas, activists said, killing 74 civilians in an offensive that has sent thousands of refugees surging into Turkey before next week’s U.N.-backed ceasefire aimed at staunching a year of bloodshed.

At least 15 rebels and 17 security force members were also killed, raising the death toll in violence to over 100.

Each side has accused the other of intensifying assaults in the run-up to the truce due to take effect early on Thursday if government forces begin pulling back from towns 48 hours earlier in line with U.N.-Arab League envoy Kofi Annan’s peace plan.

Amateur activist video showed scenes of carnage said to be the aftermath of the shelling. Mangled limbs and body parts in blankets were being loaded on a pick-up truck. A second video showed 13 men who appeared to have been tied up and executed.

No comment was immediately available from Syrian officials. The videos could not be independently verified. The government has placed tight restrictions on media access in Syria.

The Syrian Observatory for Human Rights said at least 74 civilians had been killed, including 40 in an army attack on al-Latmana, in Hama province, that began on Friday. The rebel Free Syrian Army lost 15 men in the battle, it said, and 17 members of the security forces were killed across the country.

In an activist video from al-Latmana, mourners held aloft the limp corpse of a child. A row of bodies lay on the ground.

The Observatory report said 12 were killed by shelling as the army swept through villages in Idlib province.

A rocket hit a bus travelling from Lebanon to Syria at Jousa just inside Syria, a Lebanese security source said. Witnesses said six Syrians were killed. Lebanese medics confirmed two dead and nine wounded. It was not clear who had fired the rocket.

Country towns north of Aleppo have endured days of clashes and bombardment, prompting 3,000 civilians to flee over the Turkish border on Friday alone – about 10 times the daily number before Assad accepted Annan’s plan 10 days ago.

Turkish Prime Minister Tayyip Erdogan said on Saturday the number of refugees entering Turkey was rising. Ankara fears an all-out war in Syria would unleash a flood of refugees.

“At the moment we have 24,000 Syrians who have entered Turkey. Of course this number is rising,” Erdogan told reporters before departing on a trip to China.

“We are taking measures for this, though we will not close the gates. The United Nations, however, has to toughen its stance,” he said. “In particular Kofi Annan has to hold firm. He announced a deadline of April 10. I believe that he should monitor the situation very closely.”

The Syrian leader is fighting a popular uprising, which he blames on foreign-backed “terrorists”, that has spawned an armed insurgency in response to violent repression of protests.

While many in Syria’s Sunni Muslim majority back the revolt, especially in provincial areas, Assad retains support from his own minority Alawite sect and other minorities fearful that his overthrow would lead to civil war or Islamist rule.

In Damascus, thousands of flag-waving Assad supporters came out to mark the founding in 1947 of Syria’s ruling Baath Party.

The bloodletting of the past week or so does not bode well for implementation of Annan’s ceasefire plan.

This requires Assad to “begin pullback of military concentrations in and around population centers” by Tuesday.

Syria has said the plan does not apply to armed police, who have played a significant role in battling the uprising in which security forces have killed more than 9,000 people, according to U.N. estimate. Syria says its opponents have killed more than 2,500 troops and police since the unrest began in March 2011.

Annan’s plan does not stipulate a complete army withdrawal to barracks or mention police.

“This is not the reduction in offensive Syrian government security operations that all agree must be the first step for the Annan initiative to succeed,” Ford said in Washington.

A statement by U.N. Secretary-General Ban Ki-moon said the April 10 timeline “is not an excuse for continued killing”.

“The Syrian authorities remain fully accountable for grave violations of human rights and international humanitarian law. These must stop at once,” Ban said on Friday.