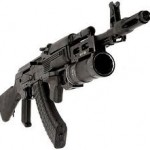 Wearing dark glasses as he sat in a fashionable Beirut cafe, Abu Abode, a Lebanese arms dealer, did not mince his words as he described the flourishing business of smuggling weapons into neighbouring Syria.

“Small arms and automatic rifles are in high demand by the Syrian rebels,” Abu Abode, not his real name, told dpa.

Peaceful pro-democracy protests, which started in Syria in March 2011, have turned into an armed conflict between the government of President Bashar al-Assad and opposition rebels.

“We are using the same smuggling routes that we used during the civil war in Lebanon,” Abu Abode added, referring to the country’s 15-year civil strife that ended in 1990.

Abu Abode comes from Hermel, an area in north-eastern Lebanon, close to the Syrian border.

The poorly-guarded 330-kilometre border between Lebanon and Syria has clearly made it easy for Abu Abode and others like him to smuggle arms and sell them to opposition rebels.

“But since the Syrian regime planted mines on the border, we have been forced to use inhospitable routes to do the business.

On some occasions, we had to use donkeys to carry arms,” he said.

This week, Damascus announced that it had foiled several infiltration attempts by rebels carrying weapons into Syria via the northern Lebanese border.

Lebanese authorities, meanwhile, said they had arrested nine people on April 2 – six Syrians and three Lebanese nationals – on suspicion of attempting to smuggle arms into Syria.

The suspects were found driving two trucks laden with ammunition and weapons, according to a source in the Lebanese army.

Abu Abode said that, since the uprising in Syria turned into an armed revolt in August 2011, the prices of smuggled arms had soared.

“Before the revolution (began), a Soviet-made Kalashnikov assault rifle used to sell for 300 dollars.

According to him, rocket-propelled grenades were in high demand among Syrian rebels to carry out hit-and-run attacks against military troops near and in the capital Damascus.