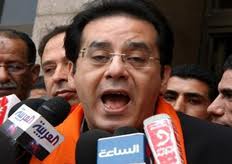 The Egyptian administrative court issued a decree on Saturday banning opposition candidate Ayman Nour from the presidential election in May, despite the decision of the junta to restore his political rights, according to a report by MENA news agency.

Nour, who challenged former president Hosni Mubarak in a 2005 election, lost an appeal last year to erase a five-year jail sentence passed on forgery charges. The sentence made him ineligible to run for office.

Tantawi decreed that Nour “could engage in all his political rights,” the official MENA news agency reported last month

Nour shot to fame when he ran in Egypt’s first multi-candidate presidential election, losing overwhelmingly to Mubarak who had ruled Egypt since 1981 and was finally ousted by a popular uprising last year.

Months after the election in which he clinched 7.6 per cent of the vote, he was sentenced to five years in jail on what many saw as politically-motivated charges.

The sentencing was denounced by the United States, which called for Nour’s release. He was finally freed in 2009 on health grounds.

Nour, who founded the Al-Ghad party, must either be nominated by a party or secure the endorsement of 30 legislators or 30,000 eligible voters from 15 provinces in order for him to participate in the presidential race

The presidential election is scheduled for May 23-24.