‘Merchant of Death’ sentenced to 25 years by US judge 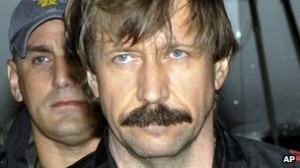 Arms dealer Viktor Bout, dubbed the “merchant of death”, has been sentenced to 25 years in jail by a US judge.

During the sentencing, the ex-Soviet officer shouted “It’s a lie” as the prosecution said he had agreed to sell weapons to kill Americans.

The 45-year-old was found guilty in November of attempting to sell heavy arms to a Colombian rebel group.

He was arrested in Bangkok in 2008 after a sting operation in which US informants posed as Colombian rebels.

Bout – who was the inspiration for the arms smuggler in the 2005 Hollywood film Lord of War – remained in custody in Thailand for two years, before being extradited to the US to face trial.

Sentencing had been delayed twice as his lawyer asked for more time prepare and accused prosecutors of “outrageous government conduct” for allegedly entrapping the Russian.

“Twenty-five years is sufficient,” US judge Shira Scheindlin said after Bout insisted he was innocent.

The conviction relates only to the alleged arms sale in Thailand, but US authorities say Bout has sold weapons to dictators and guerrilla forces in Africa, South America and the Middle East.

Manhattan US Attorney Preet Bharara said in a statement: “Viktor Bout has been international arms trafficking enemy number one for many years, arming some of the most violent conflicts around the globe.

“He was finally brought to justice in an American court.”

It is said that Bout began channelling weapons to war-torn parts of Africa during the 1990s.

In November, was convicted of conspiracy to kill US citizens and officials, deliver anti-aircraft missiles and provide aid to a terrorist organisation.

During the trial, his defence argued Bout was just trying to sell two old cargo aircraft for $5m.

“Viktor was baiting them along with the promise of arms, hoping just to sell his planes,” lawyer Albert Dayan told the court.