March 14-led opposition accused Telecommunications Minister Nicolas Sehnaoui and those who support him of being responsible for preventing the Lebanese Internal security forces and authorities from obtaining the telecom data in their investigation of the attempted assassination of Lebanese Forces leader Samir Geagea.

A senior security official told al-Joumhouria newspaper that acquiring the telecom data for one day is insufficient as the competent security authorities need to frequently analyze and follow up the data in their investigations.

The Lebanese Internal Security forces have reportedly extracted two sniper bullets, ranging between 12.7 and 14.5mm, from a wall at Geagea’s residence in Maarab.

Geagea said that the security of the Maarab compound was not breached and that the attacker had carried out the attack from a distance of one to four kilometers using very sophisticated equipment.

The security official told al-Joumhouria that Geagea’s assassination bid was planned a while ago, saying: “If the telecom data wasn’t blocked, the competent security authorities could’ve at least revealed parts of the plan and took preventive measures.”

March 14 lashed out at Sehnaoui, stating that his measures are protecting organized crime and making it easy for criminals to plan their assassination attempts.

According to al-Joumhouria, former defense minister Elias Murr, MPs Marwan Hamadeh and Sami Gemayel, ex-Prime Minister Saad Hariri, and Geagea were warned by a senior western diplomat about the possibility of assassination bids. 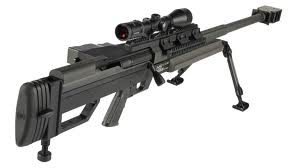 An Nahar reported that based on the initial investigations that the shots were fired from a distance of about 1.5 kms ( about 0.90 miles) from the LF HQ in Meerab. The newspaper also reported that the initial investigation indicated that the weapon used by the snipers is “very sophisticated” and “virtually unavailable in Lebanon”. It concluded attackers used the “Steyr HS.50, with the 12.7mm caliber”, a sniper rifle manufactured in Austria but mainly sold to Iran.