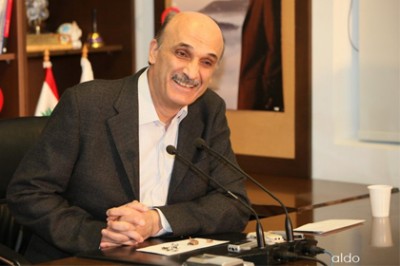 Samir Geagea, a leading Lebanese opposition figure and outspoken critic of the Syrian regime, said he survived an assassination attempt outside his house on Wednesday.

The Christian leader, who heads the Lebanese Forces party, told journalists he had been shot at twice by “snipers” as he was walking with bodyguards outside his fortified residence in Meerab, northeast of Beirut.

“I heard two shots, so I dropped to the ground,” he said, adding that the bullets made two holes in the wall of his house.

Lebanese security services who later arrived at the scene confirmed the incident, which they said they were investigating.

Geagea is a staunch critic of Damascus and its ally Hezbollah, the militant Shiite group that dominates the Lebanese government.

He said he was convinced that “those behind this operation wanted it to be a definitive message,” without specifically accusing anyone.

Between 2004 and 2008, Lebanon was rocked by the targeted killings of individuals opposed to the Syrian regime, most notably former prime minister Rafiq Hariri, father of current opposition leader Saad Hariri.

Since the start of the uprising in neighbouring Syria, the Lebanese opposition has voiced its support for the protest movement and criticised Hezbollah’s loyalty to the regime of President Bashar al-Assad.

Hariri described the shots fired at Geagea as a “terrorist attack” and “an attempt to suppress” one of the powerful voices in Lebanese politics.

Geagea, an ally of Hariri, had said in February that a “free, democratic government in Syria would be a good thing for Lebanese independence.”