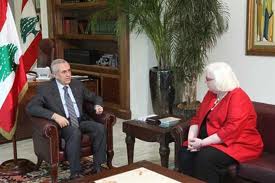 France on Thursday condemned the assassination attempt against Lebanese Forces leader Samir Geagea and called for apprehending the perpetrators.

“This cowardly act, committed against one of the main Lebanese politicians is a clear attempt to destabilize the country,” a statement issued by the French Foreign Ministry said.

The U.S. envoy to Lebanon met with Lebanese president Michel Suleiman at the Baabda palace to condemn the assassination attempt against the Lebanese Forces leader.

“Ambassador Connelly conveyed to President Suleiman the deep concern of the United States at the reports of an assassination attempt on a leading Lebanese political figure,” a statement released by the embassy said.

The statement added “that Lebanon’s embrace of and support for the Special Tribunal for Lebanon demonstrates it has definitively rejected such practices.”

The Baabda palace also issued a statement in which it said that Connelly and Suleiman also discussed bilateral relations and U.S. aid to Lebanon particularly military aid for the Lebanese army, according to Suleiman’s press office.

“With Minister Charbel, I discussed security issues. I expressed my concern about the reported attempt yesterday on Mr. Geagea, the leader of the Lebanese Forces party. Thankfully, nobody was injured,” Plumbly told reporters following his meeting with Charbel.

“But the incident underlines the need for vigilance. It is important that the investigation now [take] its course and that all sides in Lebanon continue to exert every effort to ensure that the situation remains secure and stable,” he added.

Geagea revealed on Wednesday during a news conference the assassination attempt on his life .Shots were fired at his residence, raising fears of a possible resumption of the series of assassinations that began in late 2004 and lasted several years before tapering off.

The LF leader said the incident, which took place before noon, indicated the perpetrators’ expertise, claiming the shots had been fired at least one kilometer from the target site.

An Nahar reported that based on initial investigations the shots were fired from a distance of about 1.5 kms ( about 0.90 miles) from the LF HQ in Meerab. The newspaper also reported that the initial investigation indicated that the weapon used by the snipers is “very sophisticated” and “virtually unavailable in Lebanon”. It concluded attackers used the “Steyr HS.50, with the 12.7mm caliber”, a sniper rifle manufactured in Austria but mainly sold to Iran.