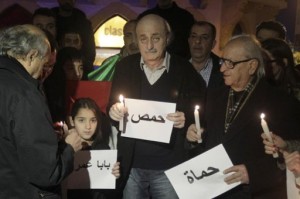 Progressive Socialist Party leader MP Walid Jumblatt in remarks to be published on Tuesday called on Hezbollah to join the Syrian uprising.

“The resistance in Lebanon must one day join the resistance of the Syrian people,” Jumblatt told the weekly newspaper Al-Anbaa.

Last week Jumblatt proclaimed that he plans to boycott the Syrian regime, regardless of the political ramifications.

“I have decided to boycott the Syrian regime whatever the costs, whether it [regime] carried on or not,” Jumblatt told As-Safir newspaper in an interview published Thursday.

“I prefer to end my life in a dispute with the Syrian regime, and I am satisfied with my decision,” Jumblatt said.

“I find myself in harmony with my convictions and my feelings. I know I may lose politically, but in the end I win myself,” he added.

Nevertheless, Jumblatt said his decision should not affect ties with Hezbollah, Assad’s main ally in Lebanon.

“Contacts with Hezbollah continue on almost a daily basis through head of the Liaison and Coordination Committee Wafiq Safa,” he assured.

“Well, let’s be realistic. What risk could I personally or by who I represent pose to Hezbollah?” Jumblatt asked.

On Monday, the PSP leader also saluted the Syrian people and the Syrian National Council.

“On the occasion of the Land Day, [I] salute the struggling Syrian people who are facing a regime that is trying to remove them from their land, raiding the country’s cities and destroying neighborhoods,” he said.

He also saluted the SNC, “which imposed itself during the Friends of Syria conference in Istanbul, and will prove itself sooner or later as an inevitable substitute for the [current] regime.”

Syria has witnessed anti-regime protests since mid-March 2011. The United Nations estimated that more than 9,000 people have been killed in the regime’s crackdown on dissent.