Tourism Minister: Lebanon is among the safest Mid-East countries 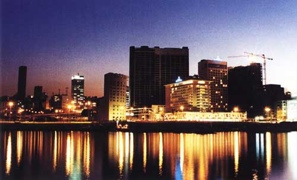 Lebanese Tourism Minister Fady Abboud participated in the international tourism exhibition of Berlin (ITB) to spread the message that Lebanon is not at war. “We want to spread the message that Lebanon today is probably one of the safest country for tourists in the Middle East and we have a unique mix of tourism offerings from skiing in the mountains to water skiing in the Mediterranean, to offer them,” adds Abboud.

In the light of the Arab Spring, Lebanon lost over 350,000 tourists last year. These numbers account for tourists who would visit the country by land, through Syria. The ministry is now looking to overcome this by encouraging more air travel. “We are trying to encourage more low cost carriers to fly into Lebanon as we believe this will draw in the numbers,” adds Abboud.

While Lebanon remains popular among the European guests for its skiing and social scene, Archaeology is gaining importance among tourists visiting Lebanon. “Religious tourism is fast growing across the country as Christianity and Lebanon goes back almost 1000 years and we are keen to tap this segment in our key source markets. After all Lebanon sets the perfect example of how the Christians and Muslims can live in harmony,” said Abboud.

Abboud is also keen to promote new aspect of tourism including eco tourism. “We are also concentrating on efforts beyond Beirut including Baalbeck and Byblos that are rich in culture and history.” Mice is another key developing segment for Lebanon. While we lack state-of-the art convention centres and thus the convention segment, Lebanon remains popular for conferences. We recognise this and are working with the government to push forward this segment,” he added.

In Beirut alone, there are over 4,000 hotel rooms that are currently under construction. With the aim to develop markets outside Beirut, the tourism authority is offering incentives to developers investing outside Beirut. Abboud is very positive about 2012 and have set an ambition target of reaching their 2010 arrivals numbers of 2.2 million tourists.