Syrian opposition: We have been abandoned by Arabs, but God is with us 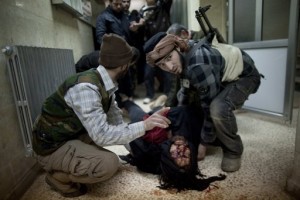 Syrian activists called for mass protests on Friday to denounce Arab countries for “abandoning” them, after an Arab summit went no further than urging dialogue to resolve the crisis in their country.

“The Muslims and the Arabs have abandoned us… but God is with us… and our determination will carry us to victory,” said a statement posted on the Syrian Revolution 2011 Facebook page, urging nationwide street demonstrations after the weekly Friday prayers.

An Arab League summit in Baghdad on Thursday, largely ignored by Sunni Arab states, approved a resolution calling for an end to the Syrian regime’s crackdown on dissent, for the opposition to unite and for parties to the conflict to launch a “serious national dialogue.”

Syria’s opposition had urged a harsher statement backing hardliners Qatar and Saudi Arabia, who have called for President Bashar al-Assad to step down and for rebels opposing his regime to be supplied with arms.

Iraqi Prime Minister Nuri al-Maliki however steered the summit away from this option, saying that arming either side of the conflict “will lead to a regional and international proxy war in Syria.”

Activists in Syria have for more than a year staged anti-regime protests each Friday after the main Muslim prayers, which have been violently put down by Assad’s forces.

The United Nations says more than 9,000 people have died in the revolt, which many fear has brought Syria to the verge of civil war.

On Thursday, activists blocked a street and burned tires in the Al-Aassali neighborhood of Damascus to protest the “failure of the Arab League,” according to a video posted on the Internet.