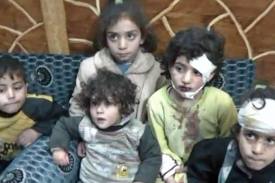 The Syrian government has detained and tortured hundreds of children, a situation called “horrendous” by Navi Pillay, the U.N. human rights chief.

“They’ve gone for the children — for whatever purposes — in large numbers,” Pillay said. “Hundreds detained and tortured. … It’s just horrendous.”

Pillay said the children were subjected to horrific treatment as a result of the unrest that has gripped Syria for more than a year, the BBC reported Wednesday.

She said reports indicated children were “shot in the knees, held together with adults in really inhumane conditions, denied medical treatment for their injuries, either held as hostages or as sources of information.”

Those responsible must be held accountable, she added.

Pillay said Syrian President Bashar Assad could end the violence against all civilians immediately if he would just issue an order.

Syria has accepted a peace plan offered by U.N.-Arab League envoy Kofi Annan. The plan calls for talks between the opposition and the regime in an “inclusive Syrian-led political process,” a cease-fire and troop withdrawal, humanitarian assistance in areas hurt by the fighting, the release of people arbitrarily detained, free journalistic access and respect for “freedom of association and the right to demonstrate peacefully.”

The plan does not require Assad to leave office.

Pillay said Assad must face justice for abuses carried out by his security forces.

“That is the legal situation,” Pillay told the BBC. “Factually there is enough evidence pointing to the fact that many of these acts are committed by the security forces [and] must have received the approval or the complicity at the highest level. … President Assad could simply issue an order to stop the killings and the killings would stop.”

Pillay said she believes the U.N. Security Council has enough credible evidence to warrant referring Syria to the International Criminal Court for prosecution.

“I feel that investigation and prosecution is a crucial element to deter and call a stop to these violations,” she said during the BBC interview.

The United Nations estimates more than 9,000 people have been killed since the uprising against Assad began a year ago. Opposition groups put the number higher.

Concerning the peace plan, U.S. Secretary of State Hillary Clinton said Assad must prove he is committed to a peaceful end to the violence.

Assad wrote in a letter he was committed to the plan, Annan said in Beijing, where he met with Chinese Prime Minister Wen Jiabao about the peace process.

“Implementation will be key,” Annan said.

Clinton told reporters in Washington, “Given Assad’s history of over-promising and under-delivering, that commitment must now be matched by immediate action.”

“We will judge Assad’s sincerity and seriousness by what he does, not by what he says,” she said. “If he is ready to bring this dark chapter in Syria’s history to a close, he can prove it by immediately ordering regime forces to stop firing and begin withdrawing from populated areas.”

Some Western diplomats expressed concern Assad’s agreement could be a ploy to buy time and put the opposition on the defensive, the British newspaper The Guardian reported.

The Assad regime did not comment on the plan Tuesday.